At a conference in Rio in December 2007, a panel of big name local coaches were discussing the essence of Brazilian football.

One point was made a few times, that Manchester United were playing their expensive new signing Anderson in central midfield, a role that no coach in his native land would have considered for a nanosecond.

In order to get inside the mentality, first we have to jettison the myth. The conception of Brazil as a mass producer of gloriously talented footballers is entirely true. But the idea that their teams take the field with no concern for tactics and a reckless disregard for defence is false and always has been. Brazil, for example, invented the back four in order to have extra defensive cover.

This last myth has been especially wide of the mark since the early 80s. First, there was the failure of the glorious, flowing 1982 team to win the World Cup. Then, there was the decreasing job security for coaches in domestic football. The response to the 'three defeats and you're sacked' mentality was for the coaches to play safe, and pack central midfield with marking specialists. 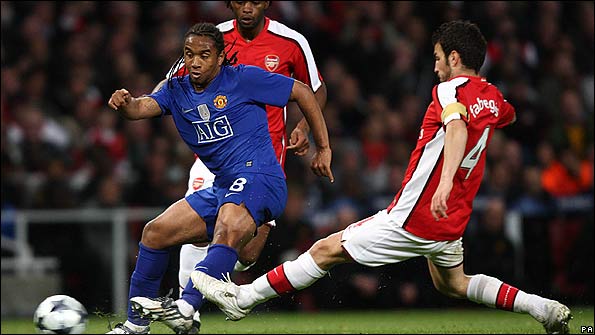 Zizinho, Pele's idol and the outstanding player of the 1950 World Cup, was a deep tactical thinker. In 1985, he published his autobiography and in his closing words put his finger on the problem: "In Brazil they have given the central midfielder, the man who has 70% of his team's possession in his power, the specific function of destroying, when it should be to set up the play."

After he wrote those words the trend became even more pronounced, with the reliance on attacking full-backs forcing the central midfielders to become ever more defensive and so, a strict division of labour has applied in the midfield. Teams field two "volantes" - to mark and cover - and two "meias" - attacking midfielders who operate further forward.

Until he joined United, Anderson was never remotely a "volante". He played some youth football as an attacking left-back, but made his name in what was seen as his natural position as a "meia".

I well recall him starring as an attacking midfielder in World Under-17 Cup in Peru in September 2005. He was voted Player of the Tournament and his performance in the semi-final against Turkey was one of the most devastating individual displays I have ever seen.

He charged through to set up a goal after 15 seconds, scored a glorious solo second, hit the bar with a free-kick, put his team-mates clean through three or four times - and in the final seconds, after Turkey had forced their way back to 3-3, his run took out their entire defence before he squared the ball for the centre-forward to tap home the winner.

The virtues showcased that night - physical strength and strength on the ball, a burst of acceleration and sustained pace, the ability to play a pass under pressure - are the same ones that have evidently persuaded the United coaching staff that he can be effective in central midfield.

To play the role he has had to add new things to his game. Previously in his career there had not been much call for defensive awareness and tackling skills. By helping him get these aspects up to scratch, United then have the benefit of his fluid passing through midfield, and his mobility in getting up to support the strikers.

It has been a bold switch by United. But as one who was wowed by Anderson on that night in Peru, a nagging doubt remains - not a conviction, nowhere near, just a doubt.

Could it be that in this new role Anderson is forced to sacrifice a bit too much of what he is naturally good at? He is now operating in a zone where giving the ball away can be disastrous. Launching one of those dribbles he unleashed against the Turks is high risk.

This necessity to rein in some of his attacking instincts might help explain his curious lack of goals for United - though this is perhaps an unfair statistic. In last year's Champions League final he came straight off the bench to confidently stroke home a high pressure penalty in the shoot-out - a strike worth plenty of Premier League goals.

One year on, Anderson is likely to have a bigger role to play in Wednesday's final. The game will surely be a test of his recently acquired defensive skills as Lionel Messi will be cutting across his zone in his trademark diagonal runs from the Barcelona right flank.

But if United are slight favourites, it is because they appear to have a better balance between attack and defence and Anderson, the newly converted "volante", is a physical embodiment of that balance.