Analysis over numbers, goals before statistics

Reader Bill Foley sent in the following question: "With regard to your recent piece on the superiority of European leagues v South American, does today's IFFHS stats not dent your argument quite a bit with [in a ranking of the world's strongest leagues] Argentina third and Brazil fifth?"

I think the biggest dent is in the brains of those responsible for such nonsense. Both countries have been placed too high - almost all their top players in their prime are in Europe, leaving the domestic game with youngsters on the way up, veterans on the way down and journeymen in between.

On top of that, the idea that Argentina's league is superior to Brazil's lacks credibility (and the idea that the Argentine league is better than Spain's defies all sanity). Check the facts - since the expansion of the Copa Libertadores, the continent's Champions League equivalent, in 2000, eight clubs from Brazil have reached the final, while Boca Juniors are the only team from Argentina to have done so. 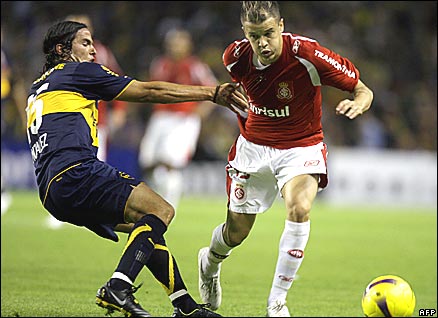 This difference is not hard to explain. Brazil's population is almost five times bigger than Argentina's, so it has more strength in depth and finds it relatively easier to replace the players it sells abroad.

This ranking-ism - the desire to turn everything into a bogus statistic - is a scourge of the modern game.

A few months ago I contributed to a feature in World Soccer magazine on the world's 50 top derbies. I sent in copy on the South American clashes, other journalists did the same from other continents and the production staff in London decided on an order for them.

I thought it was a fascinating piece. It taught me much about social rifts around the globe and how they are reflected in football.

But when I saw how it was being debated on websites I was disappointed - there seemed to be no discussion on the content, and lots of rows and complaints of the type that game 42 was much more important than 27, and so on. A triumph for numbers over analysis.

This can also extend to the action on the field. There have been many times in the Maracana stadium when I have been sitting next to the team collecting match statistics. "Accurate pass by the number 5," the team leader would call out, though the ball had been blasted calf-height on the recipient's wrong foot, keeping the play so tight that loss of possession was inevitable, or "inaccurate pass by the number 8," after he had played an inspired ball inside the opposing full -back which might have set up a chance if his team-mate had been bright enough to read it.

Witnessing the match stats being compiled has made me acutely aware of their limitations. Football is too fluid for the rigidity of the statistical mind. Has the ball been used well? This depends, surely, on the situation of the game, the zone of the pitch - on considerations that cannot be reduced to a statistic.

If football were just numbers it would be bingo, and would not have become such a global passion. Even football's key statistic - goals - are not the be all and end all. It is often said that no one remembers who came second, but it's not true. The likes of Hungary in 1954 and Holland 20 years later lost World Cup finals, but their teams are still remembered fondly. Brazil didn't even make the semis in 1982 - but there are many all over the world that fell in love with football after seeing the beauty of the play from Socrates, Zico, Falcao etc.

Football is never just about what you do. It's also about how you do it - and that is a difficult concept to stick a number on.

Comments on his piece in the space provided. Any other questions on South American football to vickerycolumn@hotmail.com, and I'll pick out a couple for next week.

I remember an article you wrote a couple of years ago about Fernando Redondo retiring and how this marked the end of an era with the "number five" Argentina shirt. Do you consider Mascherano - in my opinion the best ball playing defensive midfielder in the world right now - to be a worthy heir? How highly is he rated in Argentina, where I assume this position is under severe scrutiny given the players who have performed this role in the past?
Ben Entwistle

The ball-playing central midfielder is still present in Argentine football culture. Perhaps the heir to Redondo is Fernando Gago, and Maradona has, correctly in my view, identified the Mascherano-Gago partnership as crucial to the national side he is building.
Six years ago I picked out Mascherano in World Soccer magazine as one of the stars of the 2003 South American Under-20 Championships. He hadn't played a senior game for River Plate at the time, but it was clear that he had an immense future - sound positioning, tough tackling, crisp passing, and he came up big in the most important games. His progress - and I share your assessment of him - hasn't surprised me at all.
In terms of his status back home, it's probably sufficient to say that one of Maradona's first tasks as Argentina coach was to persuade him to take on the captaincy.


In the last few months I saw Coritiba's Keirrison linked with the likes of Barcelona, Valencia and my club, Liverpool for a fee upwards of £10m. It seemed almost certain that after leading the Serie A scoring charts in 2008 he would move on to Europe, so I was surprised to see that he has instead moved on to Desportivo Brasil, a team who despite my interest in Brazilian Football, I have never heard of; he has since been loaned out to Palmeiras. My question is how did he end up spurning Europe for Desportivo Brasil? And while I agree it might not have been the right time for Europe, do you think he has made the right decision in leaving Coritiba?
Trevor Carey

As I understand it, the loan deal to Palmeiras has not yet been finalised. If it goes through I think it's the right move for him at this point. He's a 20-year-old centre forward who had an excellent season with Coritiba. He's strongly built and finishes well on his right foot. But he's raw, his build-up play is poor, and his left foot needs work. I don't see him as ready for Europe. With Palmeiras he'll be playing in the Copa Libertadores, plus the Sao Paulo state championship - a much higher level of football than if he stays with Coritiba.
Desportivo Brasil are part of a new development in Brazilian football - investors starting their own clubs. They are owned by sports marketing company Traffic, who are now looking to make money on player sales. Keirrison will never play for them - they only go as far as Under-20 football - but they own his registration and will hope to cash in when he does move to Europe.