Almost a decade and a half after his European adventure began, Ronaldo is back in his homeland and preparing for the new season with Corinthians.

Some see this as a sign of the growing strength of Brazilian domestic football, but I'm not so sure. To me it seems more like a sign of its weakness.

I'm a Ronaldo fan. The fact that he has scored more World Cup goals than anyone else means he belongs among the all time greats, and especially as he dominated the 2002 World Cup after fighting back from an injury that many, myself included, feared would end his career at the highest level.

But it is a fact that over the last five years, even before this latest serious knee injury, he has been unable to remain fit for a prolonged period of time.

That is why he did not end up signing for Flamengo of Rio, the club he supports, despite saying time and time again that he wants to wear their red and black shirt before he retires from the game.

He had been training with the club for four months as he recuperated from his injury, and it was assumed that either he would sign for Flamengo or go back for one last dart at Europe, so the news that he had joined Corinthians of Sao Paulo came as a huge surprise, especially to the Flamengo directors, who were accused of sleeping on the job. 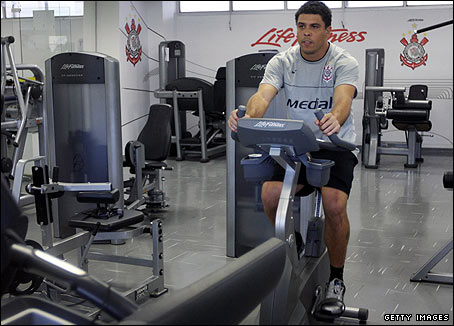 Flamengo, and potential European buyers, wanted to wait and see if Ronaldo could get fit enough to play at a high level. In footballing terms, it was a perfectly sensible decision.

Corinthians, though, were thinking along different lines. They were prepared to take the gamble of paying Ronaldo big money while he is still recovering - the season starts towards the end of January, but he is not expected to be fit until mid-February - because they were focused on the return he would give them in marketing terms.

It is here that the weakness of the current domestic Brazilian game is highlighted.

The list of top scorers in the 2008 championship tells the story. The leading marksmen were journeymen strikers in their mid 30s, plus a couple of up-and-comers around the 20 mark - no big stars anywhere near their peak, they are all in Europe.

I was recently at a conference of coaches in Brazil where this issue was confronted in extremely frank terms.

Wanderley Luxemburgo, once in charge of Real Madrid and the Brazilian national team, and a champion of Brazil five different times with four different clubs, had this to say: "Nowadays we don't have real talent in our league.

"We don't have that type of player capable of breaking through the tactical scheme of the opposition. There is no tactical formation that can't be undone by a dribble, but we're lacking the player who can produce it."

Last year Brazilian football sold a record 1,176 players abroad. True, the credit crisis might slow the process down, and there are some legislative changes afoot which might make it possible for Brazilian football to hang on to some of its players for a while longer, but the trend is not going to stop.

Today's youngsters have grown up with the dream of playing for a big European club. Those who work with youth development in Brazil talk of the difficulties they have in controlling the desire of players to move across the Atlantic as quickly as possible.

The most successful Brazilian clubs are the ones who have best adapted to this reality. Sao Paulo (champions last three years, world champions the year before that) and Internacional (world champions in 2006 and holders of the continent's UEFA Cup equivalent) are both doing the same thing; investing in youth work in order to produce and sell potential stars, allowing them to sustain a squad of good and average players.

At the moment, special attention is being paid to those in the 27-30 age group - players who might have failed in Europe and now have little hope of another chance, but in the right collective context they can be highly effective.

It is a pragmatic model, effective enough to give Sao Paulo and Internacional 1-0 victories over Liverpool and Barcelona respectively in the final of the Club World Cup, but it doesn't set the pulse racing the way that a genuine world class talent can.

Now, Corinthians have one in Ronaldo - or, at least, one who until recently was among the very best around.

If domestic Brazilian football was full of big names, then the gamble on Ronaldo would hardly be worth taking. As it is, he gives the club a marketing advantage because none of their rivals have anyone of similar stature.

But if Ronaldo's arrival at Corinthians illustrates the weakness of the current Brazilian domestic game, it also highlights the force of its history - and that is a subject I'll return to next week.

Please leave comments on this week's piece in the space provided. Other questions on South American football to vickerycolumn@hotmail.com, and I'll pick out a couple for next week.

I'm an avid follower of Brazilian football and I'm particularly looking forward to the 2014 World Cup in Brazil. Do you know whether the cities bidding to host matches have been chosen as yet? Also can you fill me in on the selection process and who will be the body to make the final decision. I guess there must be deadlines for bids. I read the FIFA Inspection report and apparently none of the stadiums in Brazil were up to World Cup standard. Do you think, taking into account the current economic crisis, Brazil will have the them ready for 2014?
Jimmy Apara

First up, I'm sure that Brazil can stage an excellent and successful World Cup. I'm not quite so confident on the vital question of legacy. This is a wonderful opportunity for Brazil. We'll have to see if they can take advantage of it.

As soon as politics is involved in Brazil, things become complicated. For political reasons Brazil doesn't want to choose the cities. This decision is being pushed to FIFA, and will be announced in March - 18 cities are bidding and FIFA will choose 10 or 12 (Brazil has been lobbying hard for 12 and thinks it has been successful on this point).

Personally, I think this is very, very slow progress. Although the decision was formally announced last October, it was made clear in March 2003 that Brazil would host the 2014 World Cup. We should be further down the line by now.

The stadiums concern me. According to the FIFA report of last year, there will be lots of remodelled stadiums which are planning to retain their current structure with the stands a long way back from the pitch. If this is so, these stadiums are obsolete before the work has even started.

But specialists are more worried about the infra-structure work. They think that the stadiums can be fixed in three years, but that the transport projects have to start urgently.

It's up to Brazilian society to keep the pressure up. The example is there with the Pan-American Games, which Rio staged last year. The authorities spent a lot of money - and a lot of time congratulating themselves - but the legacy is very poor. A repeat would be a terrible waste.