Who will win clash of the Titans?

Towards the end of this week one South American side will be pumped up, going for gold.

The other will have just bronze in its sights, and its players may well wish they were already back with their clubs.

In Beijing on Tuesday Brazil face Argentina in the semi-finals of the Olympic football tournament.

A year ago the great rivals met in Venezuela in the final of the Copa America, just as they had three years before in Lima.

Brazil won both matches and in between they also came out on top in Germany when the two teams met in the final of the 2005 Confederations Cup.

But that same week Argentina were the victors in Holland in the semi-final of the World Youth Cup.

The match featured several players who will be in action on Tuesday, and helps explain why the Beijing clash is a high pressure game for both coaches.

Argentina's Sergio Batista has a lot to live up to.

Batista, a central midfielder from the 1986 World Cup-winning side, is facing his first test since assuming control of his country's youth sides.

He can hardly do any better than his predecessors.

Argentina not only went on to win that 2005 World Youth Cup, but between 1995 and last year they won five of the seven tournaments, all under the previous management of Jose Pekerman, followed by his former assistant Hugo Tocalli.

Along with the silverware they also - and this is surely the principal point of youth football - groomed a conveyor belt of talent for the senior international squad.

And Argentina, of course, are the reigning Olympic champions, although their triumph four years ago in Athens was achieved under the command of Marcelo Bielsa, who at the time was also the coach of the senior side. 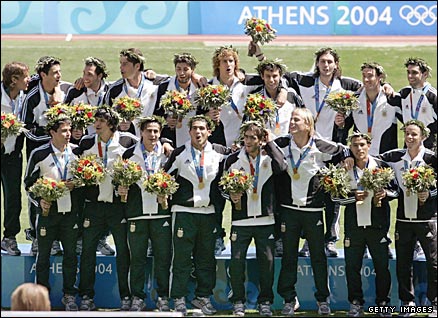 This is the arrangement that Brazil are currently using, with Dunga doubling up.

And if Batista is looking to make his mark at the start of his reign, there is speculation that the Olympics could help bring an end to Dunga's two-year spell as Brazil boss.

His side are fifth and floundering in South America's World Cup qualification campaign.

With their next match on 7 September there would in fact be very little time to replace him immediately following an Olympic failure - the foreign-based players in that squad (ie nearly all of them) need to be called up two weeks in advance.

But that next game, away to a resurgent Chile, looks a very tricky proposition.

In China, Dunga gives the impression of a man under pressure. He has been snapping about the pitches, the training facilities, the food, even the excessive enthusiasm of the volunteers.

His team were not over-impressive in Saturday's quarter-final against Cameroon, creating very little even after their opponents were down to 10 men.

The game turned on one poor pass played in extra-time by the Africans from deep inside the Brazilian half; Brazil's passing against a packed defence can be laboured, but they carry a mighty threat on the counter-attack.

After Diego set up Rafael Sobis for the crucial opening goal, they produced a combination move at pace for Marcelo to add a glorious second on the break.

In recent years Argentina have looked to play their normal expansive game and have ended up playing in to the trap of the Brazilian counter-attack.

Two months ago when the side met in a World Cup qualifier Argentina avoided a repeat by introducing Jonas Gutierrez, now of Newcastle, to close down Brazil's rampaging right back, and the result was a tame 0-0 draw.

Sergio Batista's side look less well equipped to deal with the threat.

Batista has gone with two attacking full-backs. Zabaleta on the right is more a thrusting midfielder, and the relatively inexperienced Monzon on the left owes his place more to his powerful surges than his defending.

There could well be space for Brazil to exploit. If they get a run at Argentina's centre-backs they are likely to pick up free kicks and while Ronaldinho is still short of fitness, he is still very dangerous from set pieces.

Argentina's Javier Mascherano has seen the danger. He said that he expects Brazil to sit back and break, and feels that his team need to be equally cautious.

Will Riquelme and Messi be able to work their way through for Argentina? Can Brazil pick them off on the break once more? Or is it to be stalemate?

I'm interested in your thoughts on Ezequiel Lavezzi as a player and more particularly if you feel he has the ability to break into the national side as a regular fixture, after turning out for the Argentine Olympic team.

There seemed to be a lot of good press surrounding him at San Lorenzo and in moving to Napoli he certainly seems to be following in the footsteps of one Diego Maradona in choice of club if not necessarily ability. Sean Moss

Of course he would do his chances no harm at all if he can score the winner on Tuesday.

I wonder about Aguero - a truly fantastic player, but does he need a rest? Was outstanding in the World Youth Cup last year, carried that form through the Spanish season and here is at the Olympics.

Something has to give, and so maybe it's no surprise that, so far at least, it's not quite happening for him in China. Could be Lavezzi's opportunity.

What is Sebastian Saja up to nowdays? I'm sure I remember him being a very impressive keeper for San Lorenzo who scored the odd penalty.
Stef (Wolves)

A keeper with more personality than ability, maybe? Got found out a bit when he stepped up a level, both for Argentina and in Europe, where he had spells in Italy and Spain.

Moved back to San Lorenzo, they didn't seem to want him and loaned him to Gremio in Brazil, and I think he's just joined AEK in Greece.