Why Andy Murray is the one

At the pinnacle of sport, spectators can become punch-drunk on impossibility.

Take the fabulously mis-named "serve". Some six foot five inch machine is winding up to hurl a missile at twice the national speed limit several yards beyond his opponent's arm-span. The receiver doesn't just manage to fling himself, goalie style, in the right direction. He gets his racquet to it. And somehow manages to block the ball back. He then scrambles up the cliff face so that he can continue to rally on something like level ground.

So much, so stupefying.

What we should be grateful for, is that Andy Murray gives you a sense of the effort -the unfair, unending amount of effort. 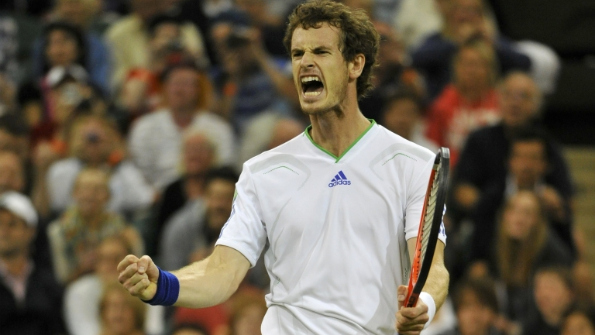 Andy Murray faces Richard Gasquet in the fourth round on Monday. Photo: Reuters

I wish I could tell you that I've observed this from the afternoons I've spent lounging on centre court, chugging Pimms and giggling with the celebs. It's not quite like that. But I have had the chance to spend hours at the practice courts, watching, close-up, the gods at play.

Number three seed, Roger Federer, is always couth, kempt and coiffed. He moves on casters. His default air is of somnolent regality.

Number one seed, Rafa Nadal, has the insouciance and cool of a Brazilian drinks waiter. If he needs to pick up a tennis ball from the ground, he doesn't do what everyone else does, and slap his racket on top of the ball so that it starts to bounce. No: he performs a sort of footballing triple salko, and juggles the ball upwards from foot to thigh to shoulder to racquet.

Number two seed, Novak Djokovic - his atypical Saturday tantrum aside - just exudes irrepressible health; he is a computer graphic-generated Australian lifeguard.
And what of number four seed, Andy Murray? He hauls his feet around, as if his shins have just been beaten with a claw hammer. His hair is a magnificently ill-tamed mess - a wild and angry copse next to the other players' manicured lawns.

They carry their demeanour on court. The other top seeds are polite sadists. When they are ahead they turn the screw. Their opponent winces and raises his arm. The umpire counts to three. The bout is over.

Andy Murray is a reluctant masochist. There are times when he appears able to find his alter ego and close a match out. But it doesn't seem to come as easily to him, this business of standing in the middle of the baseline and dictating. He seems to be more at home in Kinshasa, in 1974: Muhammad Ali sucking up George Foreman's murderous slugs, before at last punching back. Boshed into an impossible angle, yards off court, galloping at full pelt - that's when Murray will hit the unfeasible passing shot.

Sport - at its peak - reaches unknowable levels. Andy Murray's gift is to remind us how staggeringly difficult it can be.