Cycling 'must dare to change'

You can read part one of this report here and listen to the full report aired on The Today Programme here.

Cycling's most famous historical quotation deals not in honour, or prowess. It is a scream of rage, and an accusation of recklessness.

"Vous êtes des assassins!" shouted Octave Lapize, in 1910, as he wheeled his bike over the Col d'Aubisque. The target of his ire were the organisers of the premium race, the Tour de France. They - as now - had concocted a brutal, elongated, mountainous itinerary that became a three-week festival of pain and endurance.

Given the freakish demands expected of its competitors, and given its status as one of the oldest professional sports, allegations of an engrained culture of drug-taking have surrounded the sport ever since. But in recent times, those allegations have reached a new pitch.

Almost a century after Lapize's howl of disgust, another, equally unflattering phrase rang around the ears. It came from Dick Pound, the then head of the World Anti-Doping Agency, in 2006. Cycling, he said, "is in the toilet."

The stain of suspicion remains, even now. Weeks after winning the 2010 Tour de France, for the third time, it was announced that Alberto Contador had tested positive for a banned substance. He has appealed, with the backing of his national cycling federation, against his suspension. As of now, he could still ride in this year's Tour. 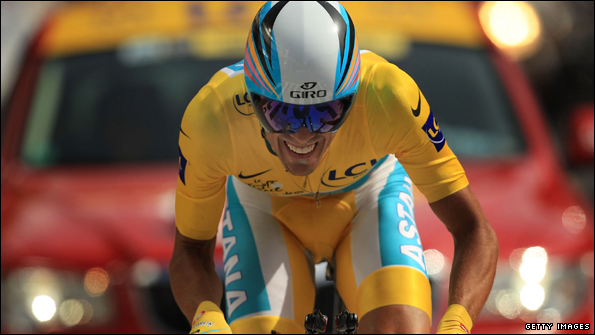 Alberto Contador is awaiting a ruling by the Court of Arbitration for Sport to find out whether he will face a suspension for doping.

For Sylvia Schenk - an athlete, lawyer, and former member of the management committee of cycling's world governing body, the International Cycling Union (UCI) - her beloved sport has just sunk a little further into the mire. "I think it's now a disaster for the Tour," she says, speaking in the library of her Frankfurt legal offices. "Because nearly all the people winning the Tour during the last 10, 12 years have been convicted of doping or have been suspected of doping."

Among those of whom she is talking is the biggest figure of them all. Lance Armstrong won the Tour an astonishing seven times. He is currently the subject of a US federal investigation into allegations of doping. Armstrong has always robustly denied the allegations, describing himself as "the most tested athlete on the planet".

Schenk is unmoved. Testing is necessary, as a deterrent of sorts, she argues. But it is not particularly effective. "Take blood-doping. It can't be detected up to now. I'm quite sure there are other substances which the athletes take nowadays which can't at the moment be analysed. So no, positive results cannot really prove anything."

Schenk is more than just another high-ranking sports official. She has also chaired the worldwide anti-corruption group, Transparency International, which lends weight to her call for nothing short of a revolution.

"What I experienced in the cycling federations, on an international and national level, is that people are afraid. Even those who don't want doping: they are afraid of having chaos, if they start to put people away, and to change the structures.

"But I hope that one day, we will have an Egypt situation within cycling. That those who really want to change things say, 'We dare. We know there may be chaos. But in chaos, there is also an opportunity'."

Schenk says that responsibility extends beyond those directly involved in the sport - the riders, the managers, the race directors and the governing bodies. She says that sponsors, TV companies, journalists and even fans have to end their passive tolerance of abuse.

So how does that gloomy diagnosis and challenging cure go down with cycling enthusiasts? On a cold grey evening, not far from Heathrow airport, about 100 amateurs, along with the odd pro, have turned out for a "Regional C+" race, at Hillingdon Cycle Circuit. The entry fee is £10. First prize will be £30.

Among the men in lycra, there is consensus that grassroots cycling is in rude health, especially at volunteer-run clubs such as this.

But there is exasperation at the antics of those at the pinnacle of the sport. "Of course it upsets me," says the lean, grey-haired Dominic Gabellini, 55. "It gives very bad publicity to the sport. I would say 99.9% of riders around me here are clean. They don't deserve this type of publicity."

Tony Gibb, 34, is involved both as a rider, and in covering the sport for TV. "It bothers me, because it's my sport. Every year, with the Tour de France, you sort of hold your breath and just pray that there's not stories coming out about this person doing that and this person doing this, and doping rings in Spain, France or Italy or wherever." 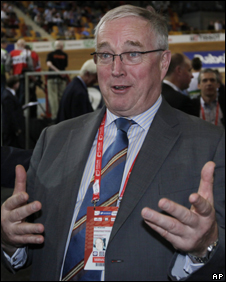 The murmurs of discontent are growing. Take the fact not just that Alberto Contador may ride this year's Tour despite failing a drugs test, but that Contador's team manager is Bjarne Riis who himself has confessed to doping when he won the Tour in 1996. And he is not the only team manager to have been a drugs cheat.

In the past, the UCI has been accused of being flaccid, at best, in the fight against doping. Critics point, incredulously, to the UCI's acceptance of a large donation from Lance Armstrong in 2002, despite the dangers of a clear conflict of interest. Now, though, the UCI's president, Pat McQuaid is sounding tough.

As a result, McQuaid has revealed to the BBC his plan to change cycling's rules: "Any cyclist who is involved in a doping infraction in their career cannot come back into management of a team in the future." McQuaid will bring his proposal before the management committee of the UCI in June. "We do suffer," he says, "and all sports suffer, from the fact that athletes tend to become officials afterwards. There's a constant circle, and it's very hard to break."

Those in charge of cycling, McQuaid among them, insist that their sport is in the vanguard of the fight against doping - a model to others. A hugely embarrassing leak, last week, suggested that, privately, even they would concede how far there is yet to go.

The French sports newspaper, L'Equipe, published the UCI's confidential doping "scale of suspicion" for all 198 participants in last year's Tour de France. It made for awkward reading all round. The question now is whether one of the dirtiest sports can lead the cleanup.