On the Trail of the Dopers: Cycling and Drugs

Part one of a two part blog. The second part will be posted on Thursday. You can listen to the full report aired on The Today Programme here.

Joe Papp is a 35 year old man who hopes his life has not been destroyed.

Papp lives in a quiet, well-heeled suburb of Pittsburgh, Pennsylvania. In July, he may be sentenced to 10 years in prison. His story, of the professional cyclist who became a doper and then a dealer, is extreme. But its power lies in what he and many others say is its reflection of a deeply entrenched culture of drug-taking in road-racing.

Cycling is one of the world's major sports and, perhaps more than any other, it has always had its doping scandals. But now it has reached a critical point. Last year's winner of the biggest race - the Tour de France - is the Spaniard Alberto Contador. He is planning to race again this year but that depends on the result of an arbitration hearing into his positive test in the 2010 edition.

In the States, the most famous cyclist of them all - and one of the biggest sporting celebrities in the world - Lance Armstrong, is being investigated by the federal authorities over allegations of doping. Cycling's governing body says it is now leading the fight against drugs. Others on the inside say the sport is in a state of denial and risking collapse. So who is right? 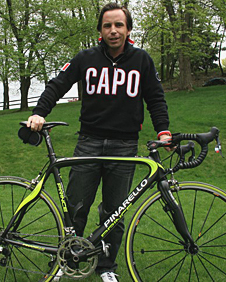 Amid his personal turmoil, Joe Papp still tries to keep to a routine, and takes one of his four bikes out for a spin each day. "I just push off, and roll down the hill," he says, standing in his front garden. "It's the same hill I've been riding down since I was 14."

That was when Papp's uncle bought him his first multi-gear bike. Papp turned pro at 19. He started doping at 26. When I ask him why, he exhales deeply.

"Honestly and genuinely, it was just because I wanted to continue competing at the level that I had been competing at. It wasn't about earning extra money. It was simply a desire to remain competitive against other riders who appeared to me and my team-mates to be artificially enhancing their performance."

It was a team-mate and his wife who introduced Papp to his first doping doctor. Papp said he was pulled in two directions. "I knew deep down it was unethical and unsporting. I was also terrified about becoming a drug addict: I didn't take cough medicine, or aspirin, or vitamin supplements up to that point. At the same time, it was a glowing orb of possibility, and a solution to remaining competitive. I succeeded for quite a few years in thinking about it only as a professional necessity. Just another tool."

And he says he was not alone. From the start of the decade, up to 2006, when he tested positive, "almost to a T, every one of my team-mates doped." He says there were several exceptions. But they were just that: exceptions. The fact that he was not at the pinnacle of his sport (although for a time he was, on International Cycling Union (UCI) points, the leading US rider in three regions) makes him believe that doping was pervasive throughout cycling, "the modus operandi for a significant number of athletes."

From nervous beginner, Papp ended up ingesting and injecting a baroque cocktail of drugs. He experimented widely. His staple involved EPO, HGH, testosterone, steroids and amphetamines. He was able to rider "harder, faster, for longer, day after day."

He insists it was easy to evade the testers. When he was caught, in 2006, it was "ironically for something I never knowingly took." One reason that the testing regime was weak, he claims, was "the official subversion of the anti-doping process, to protect the image of the race, the athlete, the team. People who were representative of the international level of cycling were involved in that." It was a process, he said, that he participated in at least half a dozen times.

When he did, finally, test positive, Papp decided to fold rather than fight. He says that many of his fellow riders saw that as the crime - "spitting in the soup", they call it in cycling. Most of his former team-mates and friends in the sport disowned him.

But even as he began to co-operate with sport's anti-doping agency, he also started dealing in performance-enhancing drugs. He supplied, in total, about 200 athletes. After a year, he was busted by the police.

After a number of delays, Papp is due to be sentenced, in court, in July. He could face up to 10 years in jail. His hope is that testimony from the US Anti-Doping Agency, which describes Papp's subsequent help in a "significant number of cases" as "very, very helpful", will be used in mitigation.

Papp readily concedes that his actions were stupid and destructive - but he also says it was easy because of the culture of doping in the sport. It is a culture which, he says, has yet to be eradicated.

The only solution, he argues, is for the matter to be seen less as a sporting problem, and more as criminal one.

"We've seen over and over again that the athletes can't be trusted to do the right thing; administrators and officials are always going to be subject to undue influence, being corrupted, and the criminal element is entrenched. The only ultimate answer is to dissuade people by threatening their freedom."

What gives Papp's prescription power is that imprisonment is a prospect he himself faces, come July. And he is candid about that prospect.

"I am utterly terrified, and fearful to a degree I've never experienced in my life. It's primordial, what I feel almost every waking minute. I understand that I violated the laws of my country, and the rules of my sport, and I need to be held accountable for that, to dissuade others. I just hope that the process of doing that isn't one that ultimately sees me done in."