Why do we run?

I'll do anything to delay the moment I cross the threshold. In fact, I often spend less time running than I do maundering about the house in my shorts and T-shirt, finding obscure pieces of DIY to occupy me before I run out of excuses and reach for the door-knob.

This got me thinking: was Joan Rivers right?

The expensively reconstructed septuagenarian comedian famously threw down a high-wicking gauntlet, confident in the knowledge no-one could pick it up. "The first time I see a jogger smiling," she said, "I'll consider it."

For a short while, I attempted to take on the challenge.

Halfway through my routine run, I'd break into what I imagine was a grin - as if, at that moment, Joan might appear, laden with bags, out of the local 99p store.

But she was never there to receive my look of pleasure. The only obvious effect was that mothers would cross the road and I would get a stitch.

So imagine my relief when a new book called "Why We Run" landed on the Sports News desks. I was further intrigued by a laudatory quote on the back cover that came not from Brendan Foster or Paula Radcliffe but Pulitzer Prize nominee and Humanities Professor Joyce Carol Oates. 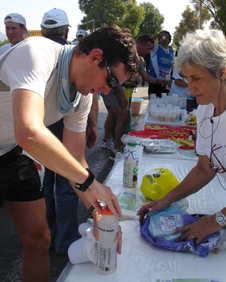 A proper runner: Robin Harvie at a checkpoint along the 245-km route of the Spartathlon

It's a wonderfully written book, a poke in the eye to those who believe athletes cannot find the words to take you into their esoteric, high-performance world - in Robin Harvie's case, that of ultra-marathons.

But I feared his "we" of the title excluded me. He celebrates pain: "I took to wearing black bin-liners under long-sleeved tops and on the hottest day of the English summer ran 20 miles up the river, wearing four layers, a woolly hat and sunglasses."

Later, he attains a spiritual merging of body and landscape, forgetting that he was running at all, "drifting on the air like a sycamore seed".

He also appears to disparage what for most of us is the ne plus ultra: "the marathon," he writes, "is really a spectator sport, and a false measure against which to measure our true capacity." For those of us with all of Emil Zapotek's air-clawing running style and none of his talent, that sounds a tad sniffy.

This is no false bravado, though. On Sunday, Harvie is running the London marathon - twice. He's starting at Big Ben at 0400 BST on race day and running to Greenwich. Then he'll join the other 30,000 and run back. (He's raising money for Mind, should you wish to contribute.)

But in person, Harvie is more generous to those of us who have - if only once - heaved our way around the marathon course. "It always gets to me," he says, "how, in the last mile, friends clap you on the back and tell you that you look great. They've no idea how painful it is."

But why place pain on a pedestal?

"I can understand that life is tough," says the 34 year-old with a day job as a publisher and a young family. "There are mortgages, kids, we get up early. But if you wake up and think - I want to do something for myself, I want to find out who I am, what I can withstand. Well, then pain is inevitably going to feature in that discovery." 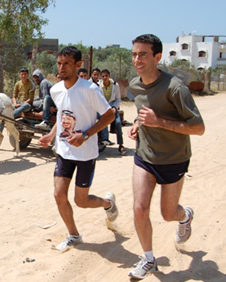 That is true. Pain and iron self-discipline are, at least, unavoidable by-products of training for and then running a marathon. And, like Harvie, I was drawn to the idea of pushing myself after I'd become lost on a Saturday afternoon jog.

In his case, he ended up running 35 miles. In my case, it was a rather weedier 30-minute attempted loop in a forest in Belgium eight years ago, which turned into a then-shocking 80 minutes.

I had other incentives to run the London marathon. The schoolboy desire to take part in a major, televised sporting event. And the impetus to slay demons hatched at school, as the boy whom one particular red-faced PE master would bark and snort at. (I held what I'm sure was a school record, as the only boy to be lapped in the 1500 metres.)

But now? Would that I could claim to experience the "merging of consciousness and landscape" which Harvie writes about.

But I guess my riposte to Joan Rivers is that I run, not because a smile splits my face but because I can't afford plastic surgery, or even gym membership and I don't have an east African physique. I run because I want to stave off senescence. I run because I have to.