Do we have a right to hear Sir Alex?

I'm not a great fan of Trappist beer.

It's just that it's much too sweet, too heavy and too strong. At the same time, though, as a venal hack, give me a story about a brewery, even a Trappist brewery, and I'll clear the diary.

So, in 2005, as the BBC's Europe correspondent, in Brussels, imagine my delight when the radio desk in London rang to say that the monks at the Westvleteren brewery had been awarded Best Beer of the World gong for their Westvleteren 12. My brow only clouded when I smacked nose-first into the wall of silence, known as the Trappist Vow. No voices, no piece. The report for Radio 4 never made it to air.

Is there a risk that Sir Alex Ferguson, and now all of MUFC management's, pointed silence could have the same wounding effect? 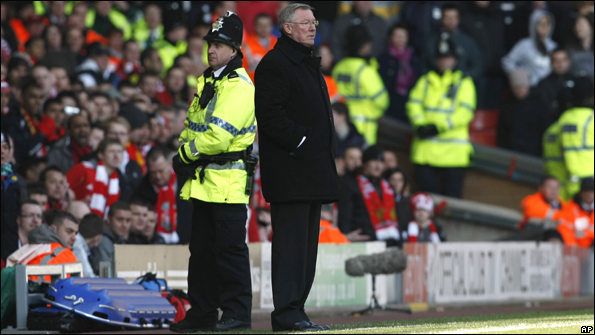 There is one clear and immediate upside. We don't have to listen to Mike Phelan. I'm sure he's a lovely chap - and a wonderful coach.

But anybody happening to listen to an uncut, three-minute post-match interview with United's assistant coach will find themselves unwittingly proving Einstein's Theory of Special Relativity. Time is not a constant.

There you are, looking vacantly at the internet, with the sound turned up. Suddenly, it's as if you're travelling at close to the speed of the light. The tick of the clock slows dramatically.

By the time Mike's said goodbye, your kids may have left home. It can be quite upsetting.

For those who are able to snap back to Earth time, there may be more immediate concerns. Man U fans have got in touch with the BBC to say that they wanted, and were denied, updates on Nani's gashed leg. Even the best of intentions were left unrequited.

So is there anything to be done?

A Premier League official, speaking on condition of anonymity, suggested probably not. "Manchester United and Sir Alex Ferugson are an anomaly," he said. "The idea that you're going to radically alter the behaviour of someone who's approaching his 70th year, after 20-odd years in management at Manchester United, is unlikely."

It might be possible to change the rules so that - Uefa style - managers are compelled to give pre and post-match news conferences.

But that would take agreement among the 20 Premier League chairmen at their next AGM, in the summer. You might have to travel from Einstein's Theory of Special Relativity (see above) to quantum physics to measure how much the other clubs care about MUFC's PR.

One elegant solution may be found if we glance across the Atlantic, at football's American cousin. The NFL fined Randy Moss of the Minnesota Vikings £15,500 ($25,000) for failing to talk to the media. Mr Moss responded by interviewing himself - a hint of monomania rarely seen since Julius Caesar, Napoleon or Cristiano Ronaldo.

But maybe the truth is that we shouldn't flinch in terror at the silence of the football manager. Sport is about what you see on the pitch, as they say, just as concerts are about what you hear.

Or perhaps it's just because Sir Alex has never, in truth, been able to top his sub-haiku offering of 1999. After "football - bloody hell", what remains to be said?