Did London deny Cameron his majority?

Voters have announced they want a separation from Labour but, they say no other party is involved.

It's not quite like that picture of a disintegrating marriage.

In fact, the Conservative suitor has made genuine headway, taking back seats like Hendon and Enfield North which were lost in 1997. 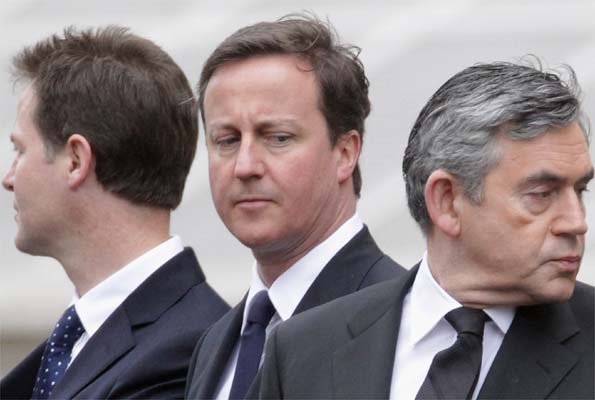 But it's only a return to a position pre-Blair in outer London and not a sign that the Tories have found the formula to govern post-Blair for the whole capital.

Despite (or is it because of?) a Conservative mayor.

Given all the money and time invested in seats like Hammersmith, Westminster North, Eltham and Tooting, failing to win them was a serious set-back. If not now, when?

These were the seats which effectively signalled that David Cameron would have no majority.

In the urban setting of inner London, their opponents argue, the Conservatives do not yet convince that they can be trusted. The post-mortems should make interesting viewing.

And so - in a sense - London has effectively helped rescue Gordon Brown, albeit temporarily. And it has denied David Cameron, perhaps indefinitely.

Now the numbers are in, will the vast majority of members of the commentariat from print and broadcast admit how badly they have called this wrong since Christmas and recognise how far the voters have ignored them?

How will they be able too to blame the TV debates for 'throwing open' the race and preventing the Conservatives when the Liberal Democrats' day did NOT in the end dawn?

No matter that nearly every newspaper was against him.

No matter too that broadcasters had long been speaking of him in the past tense.

No matter that bombardments came day-after-day, the impression created of a society rapidly descending into decay.

No matter that David Cameron"s campaign was smooth, and the media uncritical.

Gordon Brown and Labour hung on in there.

The voters, quite simply, didn't believe it in sufficient numbers and certainly not in the way most others had deemed the narrative was meant to be written.

Of course, now they have been denied the clear result they wanted, we should anticipate a relentless assault by the same media voices on the prospect of a hung parliament and the forces of hell about to be released by coalition government.

And the voters will, no doubt, take these warnings with a pinch of salt too and, instead give it a chance and consider the evidence.

Anyway, it's the end of the campaign and farewell. We may, of course, be back sooner rather than later.

We talked in passing - just a couple of posts ago - about the strong relationship between prominent London hedge fund players and the Conservatives.

We mentioned Kit Malthouse - who's deputy mayor of London and at the same time the finance director of Alpha Strategic, a company which invests the profits of hedge fund operators.

Alpha Strategic was set up by Colin Barrow, Conservative leader of Westminster Council.

A little eerily, one of my colleagues has dug up this story about him today. Read the story here.

All eyes on Westminster North

It is one of the closest constituencies to parliament and, for us, it provides a perfect microcosm of the choices on offer on Thursday.

Westminster North is a place of contrasting extremes of poverty and wealth.

It is also a Labour-Conservative marginal which could prove one of the tightest contests this week.

And what we found - spending a couple of days there - was that there were very different promises, and competing visions, for the capital from which we might draw wider lessons for the future.

I'm BBC London's political editor and presenter of the London section of the Politics Show. Here I'll be identifying the key talking points during the election campaign and trying to offer a reality check to the many promises that you'll hear up to polling day. Your thoughts welcome.

You can stay up to date with Campaign Briefing with Tim Donovan via these feeds.

Would a hung parliament bring about unity?

Sunday before the election and thoughts turn, as they do, to a roast dinner and a hung parliament. The potatoes are peeled but what could come next in parliamentary terms is more difficult to unravel. One lesson from the...

Hello! Helloooo! Gordon, where are you...? Can anyone help with this? Has anyone anywhere seen the Prime Minister on the campaign trail in the capital? We ask simply so that we can double and triple-check that we have got this...

Why so quiet during the election campaign, Boris?

It's two years since Boris Johnson won the mayoralty and signalled, said the Conservatives, that they were back as an electoral force. There's no reason to think there's been any significant falling off in that personal popularity which conveyed...

Ouch! My colleagues are unanimous. The blogosphere froths. Why then feelings of unease? On reflection, should Gordon Brown have called Mrs Duffy a 'bigot' to her face, and be done with it? Would that have been better? One of the...