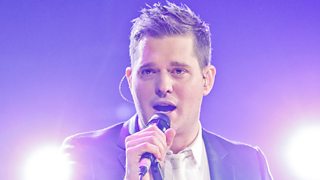 Are you sitting down? Sit down. We can exclusively reveal that smooth crooner (or smooner, if you will)... Michael Bublé will perform at The Voice UK FINAL on Saturday 22nd June! Not only that, Mr Bublé will perform two tracks, one of which we'll have right here ONLY on The Voice UK website. That’s more Bublé than a Bublé bath.

And that's not all. At this Friday’s Quarter Finals, we’re excited to announce singer songwriter Tom Odell, winner of the Brits Critics Choice Award 2013, will be performing his single ‘Another Love’. Previous winners of Brits Critics Choice include Adele, Emeli Sandé and an upcoming artist called Jessie J, who you probably haven't heard of yet.

Surely that's enough news for one day, right? Wrong! We're excited to say that last year’s final four will be making their return to The Voice UK, where it all began. Bo Bruce, Tyler James, Vince Kidd and last year's champ, Leanne Mitchell, will all be back on The Voice stage performing the heck out of their solo singles. We know, right? Amazing.

It’s gonna be big. It's gonna be great. And it's gonna be LIVE! So reserve your seat on the sofa now for this Friday at 7pm on BBC One.

Who's Singing What At The Quarter Finals?