One of the by-products of our information age is all the awards, "best-of" polls and honours dished out on a daily basis. They are designed to raise their subject above the day-to-day noise and clutter generated by all the stuff out there. They are part promotional tool, part editorial sieve. Book prizes, for instance, raise awareness of books in general by suggesting a shortlist of publications to try. And given that over 100,000 books are published each year in this country alone, that's a useful service.

Last Sunday's World Book Night (WBN) ran along similar lines. Except the promotional part of the equation was rather more specific. In marketing terms it was a "sampling" exercise, not dissimilar to those we encounter at shopping centres where a tasty morsel is offered in the hope that our activated salivary glands will lead us into the shop to go and buy a packet of whatever it might be. 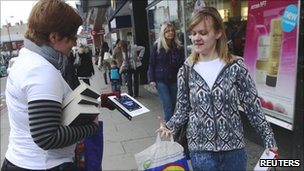 And it seems to have worked. The Bookseller reports sales of the 25 titles on the list have increased and quite possibly other novels by the selected authors will have benefitted too. And there's nothing wrong with that, it's a smart idea.

But the way the concept is sold appears to conflict with the hard commercial thinking behind it. We are told that the great give-away of a million books was a celebration of the written word, designed to encourage more reading by more people, not to stimulate the market for publishers.

Now, it is very early days in the evolution of an idea that the organisers hope will become an annual event and eventually live up to its name (ie global in reach as opposed to UK only), meaning not all the thinking through will have been done. So, I have a suggestion.

There is already an established campaign across the UK to save libraries from closure due to local council cuts. Maybe these campaigners could talk to the organisers of World Book Night to see how their aims could be aligned. The authors and publishers who took part in, and financially benefitted from, World Book Night, due to the additional retail sales - could give that money to support the libraries. And perhaps the recipients of the million books given could make a donation as well?

Judging by the mass of bookish people wearing North Face coats and swinging Cath Kidston bags (into which the free books were duly stuffed) that I saw queuing in Glasgow at one of the WBN events, this promotion was neither reaching a new audience nor people for whom the cost of buying one of the selected paperbacks would have been prohibitive. There's more. Once the original recipient has read the book the intention of WBN is that it should be handed on to someone else. Well, they could contribute too.

And now the ideas are flowing, I have another one. The man behind the WBN initiative is the ebullient publisher Jamie Byng. He is a smart, charismatic, modernising individual who is passionate about books and has the energy and contacts to make things happen. Isn't he just the sort of person who should have a prominent role in helping the country's libraries in their time of need?

In short, wouldn't it make sense for World Book Night to become an annual fundraiser for libraries? Everybody would be a winner and it remove the slight whiff of commercial opportunism cloaked as a charitable undertaking that the project current emits.