If Shakespeare were alive today and writing his line "all the world's a stage", he might add: "and most of the auditorium, too". Especially if he had just visited the £112m overhaul of the Royal Shakespeare Theatre in his home town of Stratford-upon-Avon.

The old cinema-style auditorium, with its "proscenium arch" framing the action in front of an audience all of whom face the actors, has gone. Where once there were seats there is now a broad-shouldered stage barrelling through the auditorium like a rock star's red carpet, displacing some 400 of the theatre's 1,400 seats. Those that remain are much closer to the action: the new design halves the distance of the furthest seat, from around 30 metres to just 15. 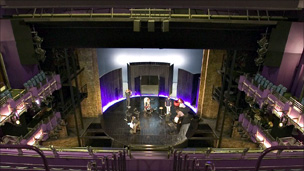 The Royal Shakespeare Company is clearly proud of this new intimacy and there is a slightly laboured visual gag: a row of seats from the old theatre hangs on a wall well away from the auditorium, high above a discreet table-for-two in the stylish new restaurant on Level Three. The wall is in fact the outer wall of the old theatre, the seats installed at the distance they would have been from the stage.

Some are saying, though, that this dramatic closeness comes at a price that is not just financial. Concerns have been raised by Sir Peter Hall and Professor Stanley Wells, both of whom are Shakespearean experts and have served Stratford in the past: Hall as its visionary artistic director in the 1950s and '60s and Wells as a long-standing scholarly board member and vice-chairman.

Their misgivings are with the RSC's commitment to the "thrust" stage, which the company has also installed next door in the smaller Swan Theatre. Sir Peter recently told the Guardian: "You come on down that vast diving board of a stage and address the person you're speaking to with your back to half the audience. So the moves tend to be based on whose turn it is to have a bit of text."

Stanley Wells shares these performative reservations; he also expressed concern about the inflexibility of the stages. He says that Shakespeare wrote knowing that his plays would be performed in a variety of locations and styles: theatres with "open" stages, town halls, private houses and at Court. Now, he feels, that while Shakespeare's plays are open to multiple interpretations, Stratford has only one way to present them.

Others have welcomed the introduction of the increasingly popular thrust design. Judi Dench says it will work wonderfully for "actors and audiences alike", a sentiment echoed by Ben Kingsley when the BBC talked to him last week. They welcome the invitation to actors to step over the threshold of the traditional proscenium arch and into the main house, creating a more intimate, immediate and dramatic experience for all.

Elsewhere the renovation is competent if unspectacular, although there are some nice touches. The teak flooring of the old stage - boards that have been trodden by some of the greatest actors of modern times - will now be walked upon by everyman. And by every woman and child as they stroll across the threshold of the new foyer where much of it is now laid. Also in the foyer is the art deco box office from Elizabeth Scott's 1932 theatre, which has been turned into a "flying" unit. If the foyer is busy and therefore a bit crammed, the bulky but beautiful ticket booth can be raised out of the way like a piece of stage scenery. 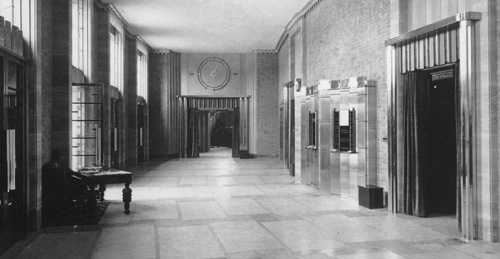 There is also the introduction of a tower: a nod to the water tower that was destroyed when the original theatre burned to the ground in 1926. But in a very 21st-Century approach, the new tower contains not water but a visitor attraction. From the top, you are treated to a wonderful panoramic view of Stratford and Warwickshire; the rest provides some useful exhibition space.

But the focus of this redevelopment, which has been completed on time and to budget, is the performing space: the new auditoriums and thrust stages of the main Royal Shakespeare Theatre and the Swan.

In an age where the public appetite is for memorable live experiences, the thrust stage gives companies the opportunity to present their work to audiences with a more immersive, three-dimensional treatment. After all, it would be embarrassing if a trip to watch the Avatar movie felt more exciting and "experiential" than live theatre presented by one of the world's most revered companies.

The newly-refurbished and redesigned theatre will open to the public tomorrow.