This caught my eye. It's funny and oddly compelling.

The film is of an installation by a contemporary French artist called Celeste Boursier-Mougenot. It's very Marcel Duchamp, the French artist who started the conceptual art ball rolling nearly a hundred years ago. 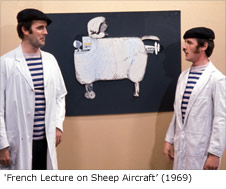 Duchamp pioneered combining everyday materials, philosophical comment and humour, an idea that seeped into places like the 1960s pop group the Bonzo Dog Doo-Dah Band (they wanted to call themselves the Bonzo Dog Dada band, but worried people wouldn't get it) and Monty Python.

But Duchamp's more radical idea was to introduce chance into the creation of art. In 1913-14 he made 3 Standard Stoppages, a work of art that was the result of the random actions of mechanised contraptions. At the time, he was largely dismissed as a crazy Frenchman, but he inspired an entire avant-garde movement in art as well as the music of John Cage and the choreography of Merce Cunningham. Duchamp was not short of self-confidence, but the idea of adding chance to the creative process was rather humble.

"That's so random" is a common refrain nowadays, referring to a supposedly non-logical thought or event. It was also the clarion cry of the Dadaists, the anti-art, anti-rational early-20th-Century art movement that argued that it was rational thought that led to World War I.

Duchamp was much loved by the Dada movement. I wonder what Dadaists would have made of the internet. It's interesting that, as far as I am aware, no contemporary artist has yet harnessed this extraordinary technology to make a significant artwork. Of course, maybe I'm wrong and am missing something great - do you know of any net-based art works that are worth a look?

Maybe you have made one (an artwork made specifically for the medium, as opposed to a film such as the one above, which uses the net only as a means of dissemination)?

If you, like me, can't find any net-based art of note, why do you think that is? Why, when there's been such a boom in contemporary art around the world, has no artist made the medium of the web his or her canvas? And if someone were to use the net as a medium, as opposed to making an image, or a video, or even an interactive Flash animation, what would the resulting art look, or sound, or feel like?

Duchamp and the Dadaists would have had hours of artistic amusement creating spoof websites, unintelligible Wiki entries and general questioning of the status quo.

Perhaps that is what Celeste Boursier-Mougenot should do next after the installation of his 40 Finches work opens at London's Barbican art gallery on 27 February. Like Duchamp, he seems to understand the creative potential of random acts and non-directed participation. He's already proved in this artwork that while Keith Richards and Eric Clapton might be masters of the Gibson Les Paul, even they cannot play it like 40 wild birds - not a chance.

Update 5 Feb: On Tuesday I asked: if, like me, you can't find any net-based art of note, why do you think that is? It was a question that had the effect of chucking a large stick into a hornet's nest, and some of those commenting here and around the web are aghast that I should even pose such question.

Many comments have included links to a wide range of internet-based art. Some of the work I knew well; others I didn't and enjoyed seeing. Thanks to all those who provided links. Thanks also to Roberta who made an interesting comment regarding the post generating a useful archive of some net-based art. It's a good point; please continue to add links.

But my question was of eminence not of existence. As the Turner Prize-winning artist Jeremy Deller said recently to Charlotte Higgins of the Guardian, "I'm still waiting for someone to use the internet, really use the internet. We're still in a post-Warhol era. We haven't got beyond it."

Of course there is plenty of net-art about and has been for some time, and for the net-art cognoscenti there are stand-out works and practitioners. But for some, which includes many museum curators as well as Jeremy Deller, there hasn't been that moment of epiphany, where they feel they have seen a great work of art created using the medium.

That doesn't make them wrong or ignorant; it's just the subjective nature of the arts. And I don't think they're alone. Why, when the internet has become such a central part of people's everyday lives and at a time when there is enormous interest in contemporary art, is there not one net-based artist or artwork that, say, the layman would recognise by name or output?

To ask that question is in no sense to belittle the often intelligent, thoughtful and fascinating nature of net-based art, and it is not about being unaware of the presence of that art - it is to generate a debate: why, to many in the art world and the public in general, is it "not of note"?

Maybe it's just a issue of timing. It took a while for video-based art to gain real traction. Curators have told me that it was not until the likes of Bruce Nauman in the 1970s that artists using video started to become relatively well-known. Perhaps, just by having this debate, knowledge of net-art will increase in the public consciousness. It certainly has in mine.