Inflation up. Growth down. Uncertainty everywhere

You don't go to Inflation Report press conferences nowadays to get cheered up. The "news", if we can call it that, is that the Bank's Monetary Policy Committee (MPC) now thinks inflation will be significantly higher than they previously thought, not just in 2011 but in 2012. Indeed, if reality - by some freakish accident - follows the path suggested by the new forecast, the target measure of inflation will still be within shouting distance of 3% a year from now.

This won't come as a surprise to many, though the sharp rises in utility prices which underpin the new forecast will come as a shock to consumers who hoped the period of rising energy bills might soon be over.

The chart below (Chart 5.2, Chapter 5, page 39) shows the range of possibilities now for inflation in the second quarter of 2012 (in red) compared to the forecasts the Bank drew up in February (marked by the grey line). This shows clearly how the distribution has shifted, with a mid-point close to 3% instead of 2%. 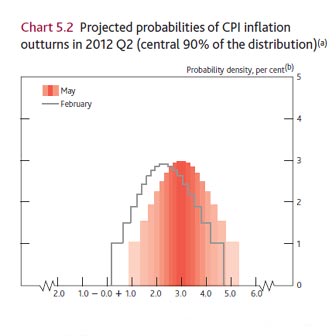 As usual, every word the MPC or Mervyn King says on this subject comes laden with caveats and reminders of the uncertainty that surrounds them. But other things equal, the implication of this new forecast is that real wages will be further squeezed in 2012. Indeed, the Bank needs "other things to be equal" - needs nominal wages not to respond to this extra bout of inflation - for the rest of its forecast to be realised, and inflation to fall back to target by the middle of 2013.

A similar chart for GDP (page 41, if you're interested) shows the Bank has not made such large adjustments to its growth forecasts, though the picture is somewhat weaker than before.

There was much discussion in the press conference of what the governor was pleased to call the "soft patch" in the recovery: whether it would last, and what the long-term impact might be for the level of national output in a few years' time.

On this, the Bank is still on the more optimistic side of the spectrum; it thinks growth in the first quarter was probably stronger than the ONS figures suggest (yes, it's that construction output puzzle again), and that the recovery will probably get back on track over the next six months.

But, as I keep saying, what counts as an optimistic forecast these days is pretty anaemic by historical standards, and compared to the Bank's own forecast, only a year ago, of growth this year of nearly 3%. Also, though the path of the recovery from here might not be very different before, we will be starting from a lower base.

In that sense, the Bank is saying that the ground lost at the end of last year will not be quickly made up. To quote the report:

"The projection for growth implies a lower level of GDP than was judged probable in February. Given the observed weakness in productivity over recent quarters, the Committee judges that the outlook for productivity, and so for the supply capacity of the economy, is also weaker than in February."

Productivity has been unusually weak since the start of the recession, reflecting the fact that employment has held up even as output has gone down. The Bank thinks that part of the shortfall in productivity will never be regained - in other words, output per worker might be permanently lower as a result of this crisis, with, potentially, long-term consequences for national income as well. But the Bank does think that companies have some room to expand productivity and output at limited extra cost. That is what is known as spare capacity.

However, it's also possible that firms will try to regain their lost productivity another way, by simply laying off workers they have previously tried to keep on. Long-term, that might not be disastrous for national output (if the higher productivity ultimately generates higher demand) but it would have pretty undesirable short-term consequences for the labour market.

So much for the big picture on growth and inflation. The other thing that jumped out at me was the governor's comments on the relatively high cost of bank funding and how this was influencing monetary policy.

As this second chart shows, the marginal cost of money, if you are a bank, is much lower now than it was at the height of the crisis. But the gap between the rate banks pay and the official base rate is still high by historical standards.

It's no secret that this was a key factor behind the MPC's decision to cut the official interest rate so dramatically, and keep it at this low levelfor so long. But it was interesting to hear Mervyn King spell out that the future level of interest rates would be dependent, not just on the state of the economy but also on the state of the wholesale market for bank funding. 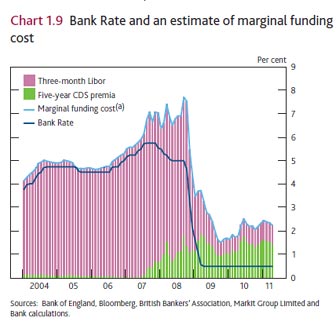 As he said, if the gap between the official Bank rate and the actual cost of funds for banks starts to narrow, that would suggest that the official interest rate would need to go up, merely to keep the stance of monetary stance unchanged. (If the Bank rate didn't go up, in those circumstances, that would mean policy had been loosened, assuming that banks pass on the fall in the cost of money to their customers or their shareholders.)

It's always been technically true that the market price banks pay for their money will affect the interest rate they offer to us - with consequences, in turn, for the way that the MPC thinks about the level of the Bank rate. But it's rare that the gap between these three should be so consequential for policy.