Here's what I learned from spending almost an entire day in Greece.

First, most Greeks I spoke to don't want the country to default on its obligations, and the average person there probably has a better idea of what a default would mean for the country in the short-term than some of the outsiders who blithely recommend it.

Of course, that's especially true of anyone close to the financial system. But reformers - inside and outside the government - suspect the political cost of default could be equally high. To their mind, the debt crisis has forced a once in a generation opportunity to push through long overdue reforms. As and when the debt burden is lifted, they worry that this great window of reform opportunity will close as well.

That may explain why - as I mentioned on the Today programme this morning - the government is still, amazingly, a little ahead in the opinion polls. Austerity has few fans, but so far the opposition has not persuaded the voters that there is a better alternative.

But all of this is about the short-term. Another observation from my brief time in Greece is that even the most committed optimists question whether the government can get to the end of the IMF programme without some form of debt restructuring. Put simply, no country has ever achieved the fiscal and economic turnaround the government has committed itself to without either a default or a currency devaluation. Usually both (though I wouldn't lay bets on Greece leaving the euro). 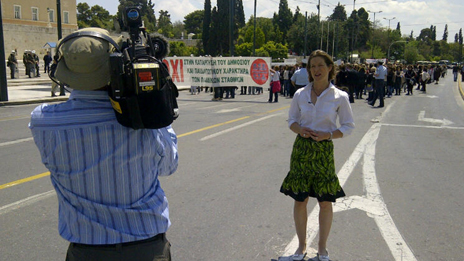 The fact that everyone - inside and outside Greece - expects a debt restructuring in the future is precisely why the Germans and some others are keen to see voluntary "re-profiling" of privately held Greek debt this year. They don't want most of the private bondholders - holding debt that matures in the next year or so - to get out, leaving mainly governments and official institutions bearing the brunt of a default after 2012.

But of course, it is that same logic that will make it hard to persuade private investors and institutions to take on longer term debt "voluntarily". They want out as much as the governments want them in.

If Greece does have to go down the re-profiling road, Greek bankers are terrified that the ratings agencies will consider it a "selective default", and they will no longer be able to use Greek debt as collateral for funds from the European Central Bank. A lot of energy - inside and outside Greece - is now being devoted to establishing whether this can be avoided.

Meanwhile, the underlying drumbeat in Athens seems much the same as it is elsewhere - "Lord gives us a Greek default, but not yet."

Update 14:39: I hoped my ironic reference to being in Greece "an entire day" would suggest humility - and act as a health warning for what followed. But it appears that many of you took it literally.

To be clear: I do think there's a limit to what anyone can discover about a country in a single day. I do not think 24 hours is a long time.