The 'separation principle' and the euro

The European Central bank can afford to ignore the likes of Greece and the Republic of Ireland when it sets interest rates - for the same reason that the eurozone can afford to bail them out. They're small.

Between them, the crisis economies on the periphery account for about 18% of eurozone GDP. Germany alone accounts for 30%, and it grew by 3.6% in 2010. 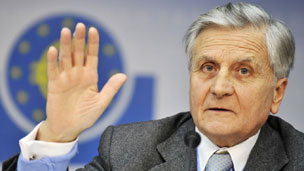 Strong hints yesterday from Jean-Claude Trichet that the ECB would raise rates next month will not have gone down well in Portugal and Athens. They need higher interest rates like a hole in the head. But as these governments will have learned by now, that is how the eurozone works. One interest rate very rarely fits all.

For most of the single currency's first decade, the ECB's policy rate was probably too high for Germany - and too low for the booming periphery. Germany's domestic consumption grew by just 1% a year, on average, for the first eight years of the euro. Consumption growth in Spain, Portugal and the Irish Republic was many times that. And we all know what happened to house prices and the level of private debt.

Still digesting the enormous costs of unification, German workers saw their real wages squeezed in this period, as German companies slowly re-built their competitiveness, while the countries at the periphery had a ball.

Now, as any German politician will happily tell you, the shoe is on the other foot. Now it's Spain, Portugal and the others who must sacrifice short-term growth for long-term competitiveness. For them, even a record low interest rate is probably too high. For Germany it looks too low.

This, say the true believers in the euro, is how you would expect a single currency to work among such a diverse collection of states. When one group of countries is down, the other is up - and vice versa. Only gradually do they see-saw toward the same path.

A logical consequence of this dynamic is that interest rates will go up this year, even if several eurozone economies are still going down.

Except, these days it isn't really "one monetary policy fits all". Because the European Central Bank is still providing large amounts of exceptional support to eurozone banks. And most of that support is helping the periphery.

On the same day that Mr Trichet talked sternly about "strong vigilance" on inflation, the ECB was announcing that these refinancing operations would remain in place for at least the next three months. To the surprise of some market-watchers, there were not even any efforts to further limit funding for banks now "addicted" to ECB support.

The ECB president was keen to stress the "separation principle": there's monetary policy, and there's exceptional support for the banking system and woe betide anyone who confuses the two. The Greek, Portuguese and Irish governments will see less of a distinction, but they are very glad that the ECB does. Arguably, the ECB's refinancing operations for the banks are playing a much more important role in supporting their economies right now than the official interest rate.

Make no mistake: the separation principle is very important indeed to the ECB. In a messy time for the eurozone, it is a source of pride to the ECB that its interest rate policy has stayed "clean". You may not agree with its judgements, but even the critics will accept that interest rate policy has been set according to the economics, not the politics. Yesterday's press conference was a case in point. Happily for the periphery, the rest of the ECB's response to the crisis has been a lot messier.