Are we all making too much fuss about the Spending Review? Nick Clegg thinks so. He likes to point out that, even with all the cuts we will see unveiled tomorrow by the chancellor, total public spending in 2014-15 will only be back to where it was, as a share of the economy, in 2006-7. At the end of the Parliament, the government will be spending £41bn more, in cash terms, than it is today.

That doesn't sound so bad. How, you might ask, can it possibly take the deepest and most prolonged spending cuts since World War II, simply to take government spending back to where it was four years ago?

The answer, as a certain meerkat would say, is "simples". All you need is the largest, most sustained increase in public spending for over 50 years, the deepest recession in more than 70 years, and the first decline in Britain's nominal GDP since records began.

Take a look at this chart, which shows total government spending in real terms since 1955. There are two lessons to take from it. One is that the pressure on government spending since WWII has been relentlessly upward. You could do the same chart for almost any developed economy in the second half of the 21st Century. As we get richer, we demand more of the kinds of things that government provides, and the cost of those things often rises faster than the economy. 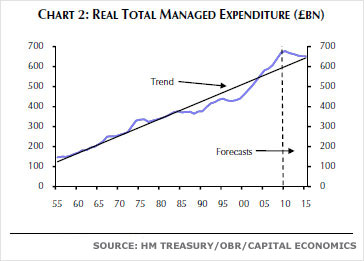 It takes a very determined government - taking some very tough decisions - to fight that upward pressure for any length of time. You'll note that the Thatcher era barely registers on the chart.

(Before you ask, yes, I do realise that a chart of real GDP since 1955 would look similar to this. Spending as share of the economy tended to rise until the 80s. It then bounced around the low 40s until the end of the century.  I wanted to use this chart to show how the government's plans related to the long-term trend.)

The second lesson is that, even by post-war standards, the increase in public spending from 1999-2000 until 2009-10 was exceptional. Spending rose by 53% in real terms over this period. In effect, the coalition is "only" planning to unwind half of that increase, to take the growth in spending back to its long-term trend. But that doesn't mean it will be easy.

Why did spending rise so fast? About half of it was due to the recession (see below). But, as Tim Morgan points out in a paper for the Centre for Policy Studies, spending in 2006-7 was already 26% higher, in real terms, than it had been in 1999-2000. That was Labour's promised investment in public services.

Maybe public services did not feel 26% better. But all that means is that it was spent inefficiently, and/or prices and wages in the public sector rose much faster than the economy overall (which they surely did). The money definitely went out the door.

Then the recession came, with a real decline in GDP of 6% between the spring of 2008 and the autumn of 2009. We have had recessions before, of course, but few that deep, and none, in modern times, that was accompanied by an annual decline in the cash value of GDP.

As a general rule, cash GDP rises by at least 5% a year, meaning that spending can rise by that amount, in cash terms, without rising as a share of the economy. Even in a bad recession, the cash value of output usually goes up a few percent, because prices are rising, even as amount of stuff we produce as a nationa has gone down.

The unprecedented 3.6% fall that occurred in 2009 meant that spending would have jumped as a share of GDP, even if the nominal amount of spending had remained unchanged.

As we know, spending did not remain unchanged. It grew as the natural consequence of the recession, and also because of the stimulus programme (though that had a fairly small part in the drama.) Spending by departments also took off in real terms, because the government chose not to row back on nominal spending totals which had anticipated a much higher rate of economy-wide inflation. So spending rose sharply both in real terms and as a share of the economy.

As Alan Johnson pointed out yesterday, George Osborne and David Cameron largely went along with this spending. They only sounded the alarm on spending toward the end of 2008, and then only to reject the stimulus.

Thanks to the promise of a real terms increase for the NHS - health will take up a much larger part of that departmental total. In 2006-7 one pound of every four spent by departments was spent by the NHS. On current plans, I reckon that by 2014-15 it will be accounting for one in every three pounds spent.

What else will we be spending on? Well, there will be more spent on central government debt interest, but perhaps not as much as you might think: about 3.5% of GDP versus 2.1% in 2006-7. There will be around 0.6% of GDP more spent on social security and tax credits (though this will change on Wednesday, as the chancellor takes more cuts from there to give to departments). Absent big reforms tomorrow, we will also be spending more on state and public pensions.

Which brings me back to where I began. If the government follows through on this spending review, public spending in 2014-15 will be 4% lower, in real terms than it is today - but account for roughly the same share of the economy as it was spending in 2005-6.

Labour is right to stress that economic growth will be crucial to how tough these spending cuts feel - and, indeed, whether cuts of this magnitude are even necessary. If the economy grows faster than the coalition expects, they could take spending back to its 2006-7 level with less pain for the benefits system and individual departments. If growth falters, then the task will be harder still.

But, the coalition is right that this is not about turning Britain into Hong Kong. It is about reversing a small-ish part of the relentless upward march in government spending since WWII. The fact that it should take such a gargantuan effort to achieve even this merely demonstrates quite how relentless that upward march can be, in a rich but now ageing modern economy.