If you lose your job it could be a while before you find another. You might not think this insight was worth a Nobel prize, or the career of three whole academics. 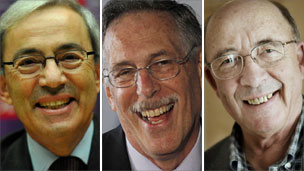 Christopher Pissarides, Peter Diamond and Dale Mortensen went a bit further than that in developing the economic theory of search. Especially in the case of Peter Diamond, their path-breaking ideas also extend well beyond this one area. They are worthy - and timely - recipients of this year's Nobel economic prize.

Forty years ago, most of the economic textbooks assumed there was a fairly seamless transition from job to job. They couldn't explain why you could have long periods where there were plenty of jobs going begging - but also a lot of people out of work.

This year's prize winners gave economists and policy-makers a better way to think about the real-world search for a job - and plenty of other kinds of searches as well. For example, some of their ideas could also be applied to the property market - and why it's often difficult for home buyers and sellers to get together.

Search theory has provided plenty of ammunition to pro-market reformers over the years: among other things, the theory teaches that when it comes to unemployment benefit, you can have too much of a good thing. Generous benefits with no time limit give people less incentive to take the first job offer - so they end up spending longer out of work, even if the job they end up with is no better than the first.

But there are also lessons here for the true believers in free markets. In effect, these theories teach that the world is a complicated place and you can't expect the market to always find people jobs on its own. There are still some free market fundamentalists - of the real business cycle school - who claim that most unemployment in voluntary. As their critics joke, for these theorists it's not been the Great Recession - but the Great Vacation. You won't find much in the theory of search to back this up.

British economists have always had a strong interest in what made the labour market tick. They've also tended to be more institutionalist in outlook, concerned more with the real world operation of real world markets and institutions, even when competitors in the US were climbing the summits of high econometric theories.

Now the world, and the profession, has come back down to earth, it's perhaps no surprise that labour market economists should get this year's award - and that there should be a British passport holder in the mix.

Though born in Cyprus, nearly all of Chris Pissarides' career has been in the UK. But clever though he is, Mr Pissarides probably hasn't got a theory to explain why he's the third UK citizen to receive a Nobel in barely a week.