The Institute For Fiscal Studies (IFS) says that the entire package of tax and benefit changes coming into force by 2014-15 is clearly regressive, including the tax increases put in train by Labour. 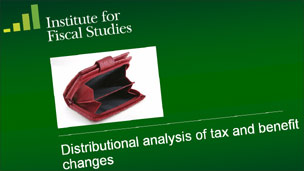 The Treasury analysis for the spending review document, which suggests otherwise, excludes a third of the benefit changes planned by the government and does not go up to 2014-15. The changes excluded by this are clearly regressive - they have the greatest effect, relative to income, on people at the lower end of the income scale.

The IFS also notes the inconsistency in the Treasury analysis - that it should make the heroic assumptions necessary to model the effect of, for example, the pupil premium across households, while making no effort to calculate the effect of removing council tax benefit and cutting housing benefit. The IFS says both are difficult to do and sensitive to the assumptions used - but benefit changes are much easier.

The IFS does not like focussing on the bottom 10% because a lot of people in this group are students or have intermittent income and are not "poor" in the sense we usually mean. So, it is more comfortable talking about the changes being clearly regressive "across 90% of the income scale", because the top 10% (largely the top 2%) are paying more than most other groups.

However, if you rank households by spending rather than income, which the Treasury also does in some of its tables, the bottom 30% of households are all contributing more to the deficit reduction effort, as a share of their spending, than the top 10%.

Taking into account all tax and benefit changes up to 2014-15, the average loss across the bottom 30% is roughly 6% of their spending, versus just over 3% for the top 10%.

More generally: the IFS notes that the benefit changes have actually increased, slightly, the money going to pensioners. By far the biggest losers from the coalition's benefit changes will be families with children.

As I discussed in a post in August, it is an interesting irony of the coalition's approach that a plan which is supposed to be "saving our children from the burden of rising national debt" is being paid for, in large part, by families and children.

The baby boomers who benefited so much from the boom, and will start to retire next year, are being relatively protected from the costs of paying for the bust.