Fairness and the recovery: Two verdicts for Mr Osborne

It may be Tony Blair's great legacy to British politics that we've spent the past few days debating whether the government's budget cuts are fair, not whether they will smother Britain's economic recovery. 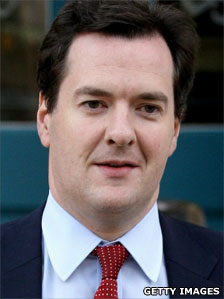 The yield on a five-year government bond or gilt this week fell below 1.5%, well below Germany's. That has not happened in the past because (a) British inflation tends to be higher than Germany's and (b) Germany's debt is perceived to be safer than Britain's.

The British 10-year yield is still above Germany's, for both reasons. Inflation in Britain is running at more than 3% and is expected to stay there for a while. Germany's inflation is only 1.3%. Usually that would suggest that British interest rates are more likely to rise in the UK in the future than in Germany.

The gap between them over the shorter time period has disappeared, not because investors have decided that British sovereign debt is safer, but because they reckon the British economy is going to need all the help from the Bank of England that it can get.

So much for the markets' verdict on this week. What about that question of fairness? Is the IFS right? Or the government?

Here's where I think we've ended up.

First, both agree that the tax and spending changes the government has introduced since June have been regressive, in the traditional sense that the bottom fifth of the population take a greater hit, relative to income, than the top.

The government thinks that they should get credit for choosing to go ahead with Labour's tax increases on the rich, some of which -  like the National Insurance rise - will require new legislation. It also thinks it's impossible to model the impact of several benefit changes accurate - including, unfortunately, the big change to housing benefit. The IFS disagrees with that last point.

If you buy the government's line, the changes are not regressive in the narrow sense that the top 2% of earners pay the most as a share of their income. But they are still regressive across the vast majority of the income scale.

Second, both sides agree that tax and benefit changes cannot be the end of the story,  when nearly half of the reduction in the structural borrowing by 2014-15 will come through cuts in public services.

Here's a stylized example, using numbers that are roughly similar to the real ones, but generously rounded for simplicity.

Say the average household in the bottom fifth has an income of around £200 per week. The government reckons that government services are so important to them, these benefits in kind are worth another £200 a week. The state plays a much smaller role in the life of the average household in the top fifth of the income distribution: they get benefits of kind of about £100 a week, to add to their weekly net income of £1,000.

The Treasury has looked at around two-thirds of departmental spending, and taken a best guess of how these different households will be affected by the cuts, including Health, Education, Communities and Local Government, Work and Pensions, and Transport. (Unlike the benefit analysis, the IFS has not said that there any glaring omissions from the Treasury's list.)

This is what lets the IFS conclude that the government's programme looks even more regressive, once spending cuts are added to the mix. That £7 is obviously worth a lot more to the poor family than the rich one.  In my (roughly right) example, its worth just over 3 per cent of their net income, while the £10 hit to the top fifth is only 1%.

For the IFS, that is more or less the end of the story. But Mr Osborne and Nick Clegg - think it is relevant that the poorer family are getting a lot more from the state to start off with. That £7 represents roughly 3% of their benefits in kind from the government whereas the £10 hit to richer households reduces their in-kind benefits by fully 10%.

If you think this sounds fishy, the Treasury doesn't provide all the details of the calculation, but I think the idea is that the bits of the state that have been hardest hit - like Higher Education - are often the parts that richer households use the most. Most of the subsidy for the poorest students has been protected.

That is why the Treasury thinks the spending cuts will be fairly evenly spread in their impact, with the poorest taking a smaller hit than the rich, relative to their total income and benefits in kind from the state - though they still need Labour's tax rises to say that the top fifth are hurting the most.

Is that a reasonable definition of fairness? I guess it depends on whether you think everything really is relative - or whether the absolute starting point also matters, when you're considering how badly a family will be hit.

If you take 3% of a family's total income and public services way from them, do you need to know how rich they are to judge whether the cut is fair? The government says you don't: a 3% hit is a 3% hit.

Polly Toynbee - and other campaigners for the poor think it is relevant, because the rich family has the means to get that service another way. If they lose their right to free child care they can go out and pay for it. The poor family probably can't.

What is fair? I leave that up to you. But perhaps it's another tribute to the Blair years that we have had weeks of political debate centred around a concept that is almost impossible to pin down.