Ben Bernanke declared war today - not on China, but on the possibility of deflation. he knows that a vicious cycle of slow growth, stagnant or falling prices and high unemployment poses a much greater threat to America's way of life than China's silly exchange rate. 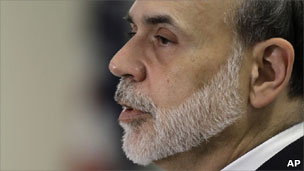 But like it or not, the exchange rate will be caught up in the Fed's response.

In the 1930s, the deflationary trap was the gold standard. Britain left it first, and was vilified for doing so - but it was also the first major economy to recover.

The verdict of economic historians has been that it would have been better for the world if other countries had followed Britain sooner.

America can't abandon its own currency. But it can make things as uncomfortable as possible for those that choose to stick with it. Ben Bernanke may not have planned it that way, but that is exactly what the Fed's policy will do.

Let me say something about what that policy will actually be.

The message of today's speech is that chairman Bernanke thinks that US inflation is dangerously low, that unemployment is dangerously high, and that growth can and should be much faster than it is now.

You don't have to be the world's most powerful academic economist to grasp these three features of the US economy. The September inflation numbers, also out today, make clear just how serious the threat of deflation is: the annual core inflation rate last month fell to 0.8%, the lowest rate since 1961.

Also note that Ben Bernanke doesn't buy the idea - common among some US economists - that a large part of the recent rise in US unemployment is structural, meaning growth will not bring it down.

Here's the key sentence in the speech, which Paul Krugman and other US Keynesians will like:

"Overall, my assessment is that the bulk of the increase in unemployment since the recession began is attributable to the sharp contraction in economic activity that occurred in the wake of the financial crisis and the continuing shortfall of aggregate demand since then, rather than to structural factors."

But if you're the Fed chairman and your mandate is to achieve price stability and full employment, you can't just observe these facts. You also need a plan to fix them.

In effect, the speech lays out a four point plan. First, tell investors that you have a roughly 2% inflation target. Second, tell them you are perfectly willing to buy a lot more bonds to push down long-term interest rates and increase nominal spending, and you think it will work.

Third, tell them that they're still underestimating your commitment to push up inflation, and you expect to keep rates low for longer than they think. Fourth, actually go out and buy a lot more bonds and hope for the best.

Arguably, with this speech the Fed is now up to point three of the plan (though part of its strength will lie in repetition). Apparently, the fourth, "QE 2", is only a matter of time.

Naturally, the speech doesn't have details on the likely scale of the Fed's asset purchases, or what, exactly, they would buy. But Bernanke does cite the Bank of England's gilt purchases approvingly.

True, the chairman says there is a big downside to such extraordinary measures, because markets will worry about the exit path. But in his next breath he asserts that, with the new tools at the Fed's disposal - primarily the capacity to mop up excess bank reserves - this problem has now been solved. Some will doubt that this is true. But it's noteworthy that he thinks it is.

Not all the Fed governors agree on the need for more QE. As in the UK, some have been making the case in recent weeks - while others have talked up the risks. But one has to imagine, on the basis of this speech, that Bernanke believes he has a majority on his side.

Some have talked of a linkage between Fed policy and the Chinese exchange rate: if the Fed agrees not to do more QE, then the Chinese will shift the exchange rate. That is not going to happen, and it shows a misunderstanding of the Fed's own view of what it is doing.

Ben Bernanke's goal is faster US growth, higher inflation and lower unemployment. A rebalancing of the global economy - and as a small step toward that, a change in the Chinese currency - can play a welcome contribution to that goal, and will also be a sign of the Fed's success. But it's a secondary objective. America's recovery comes first. Whether the rest of the world likes it or not.