All in it together?

"Today is the day that Britain steps back from the brink," was the chancellor's opening promise today. That is one yardstick by which today's decisions have to be judged: have they supported our economic future or put it at risk? The other measure of this review - as the government has itself insisted - must be whether the cuts that George Osborne has announced are fair. 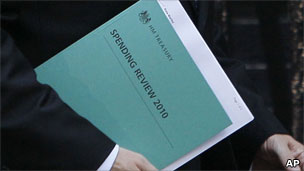 On the first, he said that Britain was now "out of the danger zone". Certainly, the UK is not now on the list of governments whose deficit-cutting credentials are in doubt. Quite the opposite.

But the interest rate on government bonds - which fell slightly today - is only one measure of the contribution that these spending cuts will make to the recovery. The other is whether the chancellor has done his best to pick cuts that will do least economic harm.

The chancellor said he had done this. For example, by adding £2bn to the capital investment plans he outlined in June, and by protecting the science budget, relatively speaking. The City won't mind that: with the government now borrowing at record low interest rates - barely 1%, in real terms - many large-scale public investments probably represent good value for money (see my piece on the Ten last week). But he can't get around the fact that public investment in real terms is still going to fall by around 30% by 2014-15.

Don't forget that around £2bn of the £5bn in cuts for 2010-11 announced soon after the election were investment projects. I have to confirm this when I see the document, but, at first glance, this extra £2bn merely puts that investment back on the books - a few years later than it would have happened if the old plans had gone through.

The OBR reckons that every 1% of GDP fall in public investment translates into a 1% hit on national output - far more than any other form of cut (or tax rise). That is one reason why the IMF suggested, in its otherwise supportive report on the UK a few weeks ago, that the government should be looking to take more from the welfare budget, especially benefits that go to people in the upper half of the income scale.

Have they done that? Yes and no. Taking child benefit from higher-rate tax-payers is going to raise a bit more than he thought - £2.5bn. But clearly the government were so spooked by the response to that change that they decided they couldn't do any more to middle class benefits.

There will be an extra £7bn from the means-tested part of the welfare budget. This will overwhelmingly affect families in the lower half of the income distribution. I cannot see how to avoid that conclusion - even with the increase in the child element of the working tax credit, which enables the government to say that child poverty is not directly increased by these changes.

But better-off pensioners can relax. Here's the key part of the speech: "we also keep the universal benefits for pensioners, in recognition of the fact that many have worked hard and saved throughout their lives. Free eye tests; free prescription charges; free bus passes; free TV licenses for the over-75s; and Winter Fuel Payments will remain exactly as budgeted for by the previous government - as promised."

True, the state retirement age is going up - but even that rise (which will be much welcomed by economists) is regressive. Poorer people start working earlier in their lives, often need to retire sooner because they do physically demanding jobs, and do not live as long as the better off. We found out this week that the gap in life expectancy between the richest and parts of the UK has risen to 13 years. The gap between the North and the South is at least seven years.

That is where judging the economic impact of these cuts overlaps with the assessment of its fairness.

We have been promised - for the first time - a Treasury assessment of the distributional impact of today's spending and benefit decisions. Since the document has not been released, I don't know what is included in that calculation - and what is left out. But, at first glance, the cuts to the welfare benefit are regressive, in the most basic sense of costing families in the lower half of the income distribution more, as a share of their income (and often in cash terms as well) than families in the upper half.

That could have an economic downside. As the IMF noted in that same report, poorer families, are more cash-constrained (you don't need an economist to tell you that. A lack of cash is rather what it means to be poor). If you cut their benefits they tend to cut their spending more than richer households do. They do not necessarily have the same capacity to complain.

But here is what seems to me to be the ticking time bomb in the government's plans - which will have economic implications as well as political ones. That is the likely impact on the demand and supply for housing.

With the housing benefit cuts, the cuts in social investment, and the re-definition of "affordable" housing to include rent that is 80% of the going market rate, the government is surely ensuring a massive rise in the demand for social housing, and only a modest increase in supply. When you consider that local authorities have also been told that they do not have to stick with the targets for private house building which were imposed on them by the previous government, this is a big gamble with the bottom end of the UK housing market.

The chancellor says, rightly, that the old system of social housing was not working. He has some bold ideas for creating a better one. But they will take time to work - if they actually do. In the meantime, you have to wonder where a lot of lower-income households in the South East are going to live.

Update, 14:30: Now we have the Spending Review document [2.03MB PDF], I can tell you that the chancellor has indeed found an extra £10.5bn from non-departmental spending to ease the burden on departments - in addition to the £11bn in welfare cuts announced in June.

£3.5bn of that has come from non-welfare changes, like the rise in public sector pension contributions. Around £7bn comes from welfare, only £2.5bn from the universal benefit change - removing child benefit from the better off.

I am now wading through the promised distributional analysis of today's changes - and all the cuts announced by Labour and the coalition in the past few years which have yet to come into force. 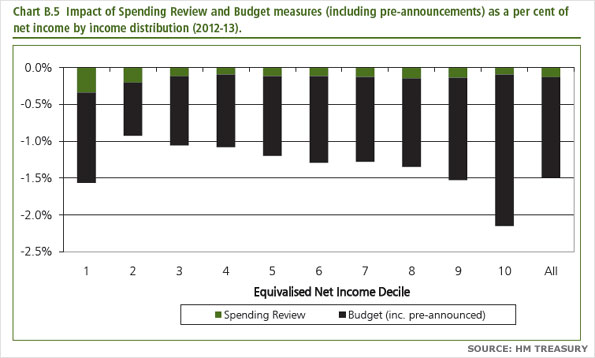 Overall, the chart shows that the benefit and tax changes coming down the track hit the richest tenth of households worst. But, as the IFS has shown, that is only because of the decision to retain part of Labour's National Insurance rise and the new 50p rate. Without those, the IFS has concluded that the extra tax rises and benefit changes announced by the coalition have been regressive. That is all the more true after today's announcements.

There is a very complicated table (see below) that claims to take account of the impact of departmental spending cuts as well - this reaches the same conclusion. The richest fifth are worst hit, but only because of the tax increases which the coalition inherited. 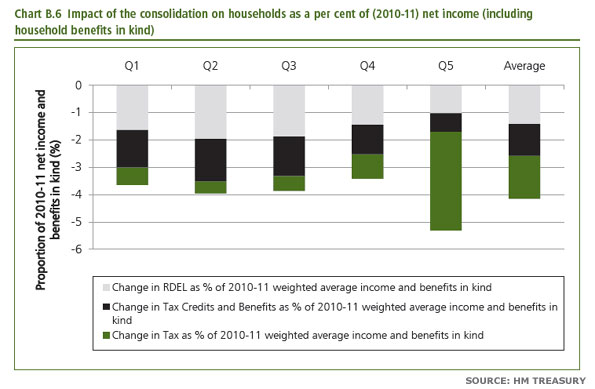 Overall, this table shows that the top fifth are paying most as a share of their income, but once again, this is only due to the tax increases coming in the next few years. The bottom 20% don't fare worst, but the IFS has pointed out, the Treasury is still not including in its analysis several benefit changes which probably most affect the poor. By the Treasury's own calculation, the spending and benefit changes which, famously, make up 80% of the coalition's deficit plan will hit the lower 60% of the income scale harder than the top 40%.

It would have been almost impossible for the government to avoid this outcome: to cut the deficit, they need to cut government spending, and the lower half of the population is much more dependent on the things that government provides than the top half. But, looking at the universal benefits that this spending review has left intact, many economists would say that they have not tried as they might have done to even the score.