UK economy: Some good news from the IMF

Partly thanks to Ed Balls, the debate over the scale and timing of spending cuts in the UK is still very much alive. Next week I'll be taking a look at the arguments in detail, as part of the BBC's special season on the spending review.

But in the meantime, anyone who agrees with Mr Balls that the government is overstating the risk posed by the deficit may be surprised to hear they got some support this week from the IMF.

Not that many people noticed. Most of the (modest) news coverage of the new research released by the fund late on Wednesday focused on the prediction that Britain's debt stock would rise to 90% in 2015, compared to a government forecast that debt will peak at around 70% of GDP in 2013-4.

That sounds scary. But it's worth noting that the fund then expects the average debt ratio for the advanced economies to be 86%. The forecast for the US is nearly 110% of GDP and France nearly 95%.

More important, the 90% figure is an old forecast, dating back to the IMF's regular round-up of global prospects in April. Since then we've had a lot of tax revenues come into the Treasury that it didn't expect in April. Oh yes, and we had a general election, which brought in a new government and some much tougher spending plans.

The interesting nuggets in these new academic papers - once you've managed to wade through them - aren't so much the forecasts for the UK but the comparison with other countries, notably the US.

One paper tries to measure "fiscal space" - how much room countries have to run up more debt, before the markets lose confidence in them, and their borrowing goes onto an explosive path. Predictably, the authors conclude that Greece, Spain, Italy, Japan and Portugal have little or no room for fiscal manoeuvre. The executive summary asserts that Ireland, Spain, the UK and the US are also "constrained" in the amount of debt they can run up over the next few years.

Again, that sounds bad. Until you actually look at the research. It turns out that, yes, Greece, Japan and Italy are on very thin ice. According to the authors' modelling, there's only a 6% chance that Greece can take on significantly more debt in the next few years, without something very bad happening. There's a less than one in five chance that Italy has any room to borrow more.

But it turns out that the UK is in much better shape. What the authors mean when they say we're "constrained" is that they think there's very little chance that the UK or the US could afford to raise their debt stock by another 100% of GDP from where we are now. But that's quite a lot of fiscal space to play with, even taking into account the rising cost of health care and pensions, which the IMF is understandably concerned about. After all, the "unprecedented in peacetime" rise in debt in the past few years has been on the order of 35% of GDP - not 100%.

In fact, the study concludes that there's a more than 75% chance that the UK has room to increase its debt stock by another 50% of GDP before getting into a vicious debt spiral. Yes, you read that right - it thinks there's a good chance our debt could go to 140% of GDP without us getting into an explosive debt spiral (though by that time I suspect we would have long ago lost our AAA rating). In this we are in better shape than the US, where there's only a 50/50 chance they could sustainably raise their debt stock by that much.

Of course, all of this is built on a lot of speculative assumptions about interest rates and the likely future behaviour of governments and markets. No-one's suggesting that the chancellor - or a would-be chancellor - should put these estimates to the test. But, if nothing else, it shows how far even the IMF thinks we are from some of the doomsday scenarios you hear on the subject of government debt.

One of the other papers makes the point in a more straightforward way. It's called "Default in Today's Advanced Economics: Unnecessary, Undesirable and Unlikely" (the clue's in the title).

It says that the risk of a sovereign debt restructuring - or default - is being "significantly overestimated" by the markets, largely because people are overstating the benefits that countries like Portugal or Ireland would actually get from a restructuring.

Why? Because people are forgetting that the big burden these countries face isn't the cost of servicing the borrowing, but the borrowing itself. Of the 10 advanced economies with the biggest deficit problems, interest payments on debt now average around 3% of GDP. The real problem is the continuing gap between spending and revenues, even before they start thinking about servicing their debt (what economists call the "primary deficit").

The average primary deficit in these economies is more than 7% of GDP. As I've mentioned before, in the context of Greece, if a country has a large primary deficit it makes less sense to default or restructure the debt, because even if they stop paying any interest at all on your debt, they will still have to find a way to cover the ongoing gap between your core spending and tax revenues. And if you've just reneged on your promises you're not going to find the market very willing to plug the hole.

The authors take a long hard look at the debt and interest rate dynamics facing different countries over the next few years. Once again, the surprising news is that Britain comes out relatively well.

True, our primary deficit - before interest payments - is up there with the worst of them: 8.8% of GDP, compared to that average figure of 7%. But when it comes to bringing it down, it turns out we have some powerful forces operating in our favour.

For example, unlike nearly every other advanced economy, the IMF expects the interest rate we pay on our debt to be lower than our rate of economic growth over the next few years. When it comes to government debt ratios, that is very important: it means we don't actually have to deliver a primary surplus - a surplus before interest servicing costs - in order to stabilise our debt.

In fact, the IMF thinks the UK could run a deficit, before interest costs, of 0.7% of GDP between 2011 and 2015 and still stabilise the debt. On average, the other advanced economies in this study have to run a primary surplus of 1 % of GDP to achieve the same thing. (It's a reflection of Greece's plight that it needs a primary surplus of 5.5 % of GDP to stop its debt ratio going up.)

Finally, the authors highlight the other big advantage that the UK has, which I've been banging on about for ages: the much longer maturity of our debt. Robert Peston underlined this a few months ago when he looked at how much different governments would need to raise in the financial markets over the next year or so. The IMF paper produces broadly similar numbers. 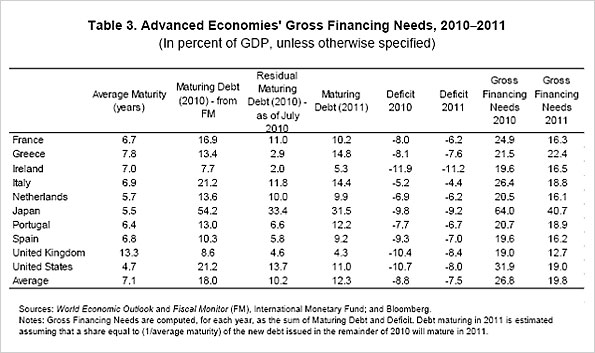 For example, in 2011, it calculates that Britain will need to raise about 13% of GDP on the markets (that's to cover both new borrowing and the old debt that needs to be rolled over). As you see, the figure for Japan is nearly 41% of GDP and the average for the advanced economies is just under 20% of GDP. And remember, these calculations don't take account of the good news on revenues since the spring, or the new government's tougher borrowing plans.

None of this is to say the IMF thinks it's fine we have a 10% of GDP deficit. Indeed, the authors explicitly praise some of the steps the government has taken to take control of the budget.

Certainly, there's no argument in these papers for an increase in spending along the lines suggested by Mr Balls. Quite the reverse.

But when you take a broader - global perspective - of Britain's budget troubles, it does start to make more sense why the international financial markets continue to see Britain's sovereign debt market as a safe haven, alongside Germany and the US. As bond yields for Portugal and the rest have ballooned over the last few months, UK gilt yields have gone down.

As the papers show, budgets everywhere are in a pretty bad state. We're not the best of a bad lot - the likes of Australia and Canada can take that prize. But we're by no means the worst. And when it comes to digging our way out, we have some important advantages that others lack.