You might expect the international markets to be a bit concerned to hear that Ireland's budget deficit this year will be a record 32% of GDP. But you'd be wrong. Today the interest rate - yield - on Irish government debt went down, and the difference between Ireland's borrowing rate and Germany's also went down, by nearly a quarter of a percentage point.

The implication is that investors are now (slightly) more relaxed about Ireland's fiscal situation than they were yesterday, when its budget deficit for 2010 was 'only' around 11% of GDP. What gives?

One answer is that the news was already "priced in": Irish bond yields have been rising for months on the back of fears about the scale of the banking system's bad debts (see chart 2 below). Another, mentioned earlier, is that the government actually won't need to borrow money from the markets until next year. 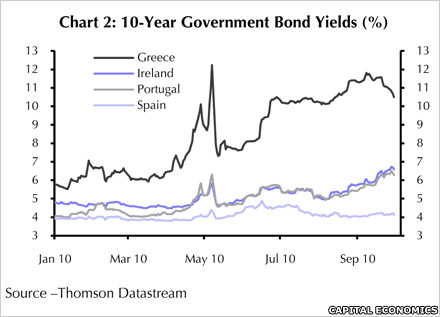 But it's also because that 32% of GDP deficit is, genuinely a one-off. If there were actually a 32% of GDP gap between what the Irish government takes in tax revenues and what it spends on public goods and services, trust me, Irish yields would be a lot higher than 6.75%. But it isn't. That gap is still roughly 12% of GDP (see chart 1 below). That's because the annual cost of running Ireland's government has not changed at all. 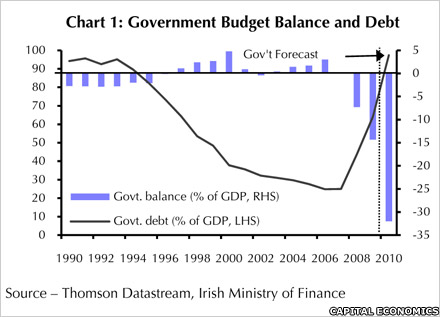 As I have written in the past, Ireland has made enormous efforts to cut borrowing, with swingeing tax rises and spending cuts worth 5% of GDP in 2009 alone. Alas, with GDP still flat or falling, the deficit has remained high. As a result, the finance minister, Brian Lenihan, already knew he would have more bad news for Irish taxpayers in early November, when he announced his new four-year budget plan.

The news will be worse as a result of today's move. But, to be clear, he doesn't have to find tax rises or spending cuts worth an extra 20% of GDP. Assuming there is no equivalent bailout next year, the deficit in 2011 will come in close to the previous target of 10% of GDP.

In fact, Mr Lenihan insists that Ireland will still keep its promise to get borrowing down to 3% of GDP by 2014. Supposedly, it will also stabilise the stock of national debt, as a share of GDP, over the same period, albeit at a rather higher level than previously thought.

This is not going to be easy - or cheap. Ireland's citizens will ultimately pay for the bailout, as they pay the interest on a much higher stock of government debt. If there are more bank bailouts to come and the economy continues to disappoint, investors may yet conclude that the numbers, for Ireland, simply do not add up. But right now, they rather like the fact that Ireland is taking the bank losses on the chin.

The government is not assuming, as the UK and others have, that money injected into troubled banks will eventually be repaid. In Ireland's case, this is probably a realistic assumption. But realism always wins points with international investors - even if the reality in question involves a budget deficit of 32% of GDP.