The fall in the claimant count is welcome, but the best news in today's labour market figures is that the economy created a lot more jobs than it lost in the three months to May. 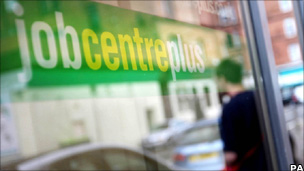 Employment rose by 160,000 - the largest rise in nearly four years.

But, as we've come to expect in this recovery, the rise was entirely due to a big rise in part-time work and self-employment. The number of full-time employees fell by 22,000, to 18.20m.

The other stand-out figure for me - and perhaps the Bank of England - is the figure for earnings growth. Pay, excluding bonuses, rose by just 1.4% year-on-year in May, the lowest rate since the end of last year. That's a 2% real pay cut at a time when the annual rate of CPI inflation was 3.4%.

As we know, things have been even tougher for private sector workers. Earnings in that part of the economy rose by just 0.6% year-on-year in May, though the average over the quarter was a bit better.

The Bank has rightly been concerned about rising inflation expectations. But even if people are expecting prices to rise at a higher rate than in the past, there is little evidence in these figures that workers can expect higher pay to compensate.

The bottom line is that UK households are still seeing a significant squeeze in living standards as a result of the financial crisis, even if more people than expected have found paying work.

And, lest we forget, the squeeze from higher taxes and lower public spending has barely begun.