Happily for the government, the bad news keeps flooding in.

First, the G20 decides that cutting deficits is now priority number one. 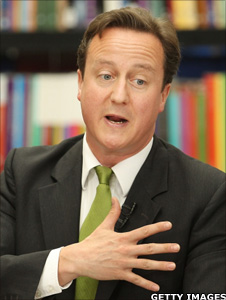 Then David Cameron pulls a Claude Rains, declaring himself "shocked, shocked" to find that the British government had been running a massive deficit. (And it's going to have to pay loads of interest on it - who knew?)

Now we have a report from Fitch, the ratings agency, reminding the world that fixing the UK public finances will be a "formidable task".

It all makes for the perfect run-up to George Osborne's statement on the comprehensive spending review this afternoon - not to mention his hair-shirt Budget in two weeks' time.

Before the election, the chancellor set "eight benchmarks" by which a Conservative government's economic policies ought to be judged, of which the most concrete was keeping the UK's triple-A credit rating.

A few weeks ago, Fitch downgraded the Spanish government's credit rating - from AAA to AA+. Spain has problems the UK doesn't: it has a bigger current-account deficit than the UK, and it's in the single currency so it can't easily adjust.

But its government made some of the same mistakes as the UK's in the lead-up to the crisis, and its public finances are in a similar state.

This latest Fitch Report makes clear that it would think hard about downgrading the UK, too, if the coalition stuck with the old government's timetable for cutting the deficit.

As I've noted before, the maturity of Britain's debt - and the Treasury's past record of bringing down deficits - give the UK leeway with the ratings agencies that Spain and others do not enjoy. Quite apart from the flexibility provided by not being in the euro.

But even with all that, Britain's vital fiscal statistics do stand out from the rest. A year ago, the goal of halving the deficit over five years looked unambitious, but just about respectable.

However, since the start of this year, nearly all of the major European economies have accelerated their plans to cut borrowing; Germany announced another round of consolidation only yesterday. That has put the UK out of step. In polite company, it is no longer respectable to say you expect to still have a deficit of 4% of GDP in 2015.

Of course, there's a reason why the UK's deficit ends up higher than the others' - it starts off a lot higher. In fact, the primary deficit - that is, the gap between spending and revenues, before taking account of the cost of servicing the debt - is a whopping 9.3% of GDP.

That's larger than any other triple AAA-rated country. Spain's is slightly higher - 9.4% of GDP. But that is one reason why it is no longer AAA.

In effect, the Fitch report says that the June Budget needs to promise to bring the deficit down a fair bit faster to be sure to keep hold of Britain's triple-A rating.

There are caveats: we know, for example, that if the Office for Budget Responsibility produces a much a starker view of Britain's long-term potential growth rates, this could massively increase the structural hole that the government needs to fill.

If so, the ratings agencies might accept that there's a limit to how quickly borrowing can come down. But even here, the lesson of the report is that there would be clear risks to the UK of standing so far outside the pack.

All of which - I need hardly say - will be music to George Osborne's ears.

Some would say the Fitch report painted an overly gloomy of Britain's fiscal future. True, the old budget forecasts for future economic growth look rosy. But to temper the optimism of politicians, Treasury officials also built into the forecasts a pessimistic view of how much of today's borrowing is structural and how much is cyclical.

Even if growth disappoints, it is quite possible that borrowing will fall more quickly, for each percentage point of growth, than the Treasury now expects, just as it rose a lot more than the Treasury expected in the crunch.

After all, borrowing came in lower than forecast in 2009-10, even though the economy shrank by a lot more than expected.

That would be good news. But we won't know the truth for several years. And, once again, any improvement in the borrowing picture could still be dwarfed by the effect of reducing the estimated long-term potential growth rate.

The previous government said the UK could continue to grow 2.5% a year - but many independent economists would disagree. Especially if we can expect immigration to play a smaller role in supporting growth than it has in the recent past.

That is another piece of bad news we can probably expect from the Office for Budget Responsibility when in reports in the next week or so.

There are times in politics when all bad news is good news. For Britain's first post-war coalition government - this is definitely one of those times.