A breakthrough on G20 budgets?

Chancellor Angela Merkel is making much of the fact that the major G20 economies are close to an agreement to halve their deficits as a share of the economy by 2013. 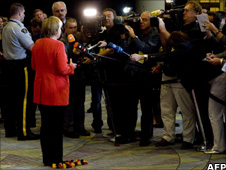 But, as is usually the case on these occasions, the leaders will be signing up to a target they came here already pledged to achieve.

Assuming that they are talking about the total deficit, not the structural piece that is not expected to go away with economic growth, every government of a major economy represented here is pledged to at least halve borrowing as a share of the economy by 2013,

Before its recent austerity programme, the Germans had pledged to cut their deficit to 3% of GDP by 2013, from around 5.5% this year. But the new plans to tighten by an extra 1% of GDP over the next three years will put them well within the target.

President Obama has said that he will halve the deficit over the next four years. They are a bit fuzzy about whether this means 2013 and 2014 - but unless something very bad happens to America's recovery, economic growth should halve it as a share of the economy by 2013. What worries the financial markets is what happens after that.

France is behind its major allies in presenting a detailed deficit plan, but it too has promised to more than halve its deficit, from around 8% of GDP now to 3% by 2013. That is what Europe's Growth and Stability Pact demands. The Italians say their deficit will fall from 5.3% of GDP in 2009 to 2.7% by 2012 - which would be a year early.

There is a question mark around Japan: it had previously said it will cut borrowing from 9.3% of GDP in 2009 to 3.9% by 2014. But they have recently promised to accelerate the pace of deficit reduction - which would make their plans consistent with a pledge along the lines that Chancellor Merkel suggests.

But it's interesting to note the former Chancellor, Alistair Darling could have signed up to this promise as well: his March Budget showed the deficit falling from 11.8% of GDP in 2009-10 to 5.2% in 2013-14.

If there is such a pledge, expect the Europeans - and our prime minister - to claim victory. Symbolically, it is important to him - and Chancellor Merkel - to have fiscal tightening feature prominently in the final agreement.

But, as the US Treasury secretary made clear in his remarks on Saturday, this debate is not just - or even mainly - about the balance between growth and fiscal tightening. It is about where growth is going to come from in the future - specifically, whether countries like Germany and Japan will do their part to support global demand, or continue to look to exports fuel their growth. That debate is very much alive here in Toronto.

Update 1817: We can now confirm that the Final Communique commits the leaders to halving their deficits by 2013 - though Japan has a get-out clause.

On the "growth versus budget cuts" debate, the Draft Communique suggests they are taking the path of least resistance. The language here looks mealy-mouthed, even by Summit standards.

The draft says: "(t)here is a risk that synchronised fiscal adjustment across several major economies could adversely impact the recovery. There is also a risk that failure to implement consolidation where necessary would undermine confidence and hamper growth."

Along with the deficit pledge, there is a promise to stabilise debt as a share of the economy by 2016. Once again, nearly all of the major economies were committed to halting the rise in their national debt by that point - most have the debt starting to fall a bit earlier.

Given that some countries will meet the targets ahead of schedule, the Canadian Prime Minister, Stephen Harper, said they should be considered "minimum fiscal targets".

What I'm waiting to see is the IMF paper, to be released with the Communique, showing how all these governments' economic plans add up to a balanced global recovery.