Scalpel before the axe

George Osborne has declared it the "fastest and most collegiate spending review in recent history." We'll see by the end of the day how collegiate the rest of Whitehall is feeling. Usually, within hours, we in the media would be given juicy examples of innocent victims and programmes who are going to be "cruelly hit". 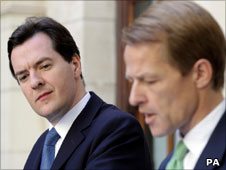 But this is not a common-or-garden Whitehall pruning exercise. It is the first round in what is going to be a long - and painful - game. Staff may well want to save their hard-luck stories for later on, when they really need them.

The chancellor and his chief secretary will be pleased that they are in a position to "protect" schools and Sure Start and 16-19 year old spending from net cuts.

Given that the Conservatives were already protecting the NHS, defence and international development, it was always surprising that schools had been left out. Especially when the Tories wanted their schools reform plans to be up and running this year.

But note that the chancellor is still looking to cut the schools budget by £670m.For the department as a whole, that represents only a 1.3% cut in current spending - when others are having to find cuts of 3 or 4%. But when you take out core spending on schools, Sure Start and 16-19-year-olds, there isn't a lot of education spending left. Local authority grants for education are going to be cut, and so will spending on higher education, even allowing for that £50m additional investment in further education colleges that was announced at the same time.

Other points to note:

A large share of the cuts - at least half - will come not from civil servants but directly out of the pockets of private sector contractors. For example, the Treasury is expecting to save £1.7bn on delaying, stopping or renegotiating private sector contracts. There will be almost as much coming out of consulting contracts, IT and other spending.

As I've discussed in the past, the Labour government's own efficiency advisers - some, like Sir Peter Gershon, now helping the coalition - thought that re-negotiating contracts was an area ripe for savings - but not necessarily this year. It will be interesting to see whether the private companies concerned cry foul - or whether they, too, decide to hold their fire for the future.

As the chancellor admitted, local government spending has also taken a big hit. More than £1.1bn of the total savings will come from cutting grants to local authorities. This is another result of the decision to ring-fence large areas such as defence, international development and health. It's good politics for the chancellor to de-ring-fence £1.7bn in local government spending this year, to give authorities more freedom to cut. But I doubt that will be enough to silence complaints.