It's official: the future of the eurozone is more important than Nick Clegg. Along with other markets, the FTSE has soared on the back of the deal agreed by European officials early this morning, and for good reason. 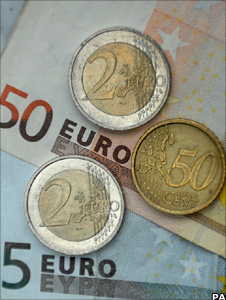 If we are to take this package at face value, the rules of European Monetary Union have been fundamentally re-written. For governments, being in the eurozone means something very different today than it did just a few weeks ago.

As we have seen, the role and responsibilities of the European Central Bank (ECB) have changed radically as well.

However, it is not clear that the tired officials who came up with this deal early this morning have really thought that far ahead.

It has all the hallmarks of what American football fans would call a "Hail Mary pass". It looks impressive, and it buys the Europeans some crucial time. But they may not like where the ball eventually ends up.

Looking across European markets - it's clear that last night's 750bn euros package to shore up the euro has already done something important: it's changed the narrative of the crisis.

The story for months has been that the eurozone governments were behind the markets. Shortly after 0100 BST, they finally got out in front - and, crucially, so did the ECB.

But there are some important questions still to be answered: especially about the 440bn euros "Special Purpose Vehicle" for eurozone countries in trouble which is really the only novel part of the programme.

The 250bn euros from the IMF has been there all along: the IMF Managing Director, Dominique Strauss-Kahn, merely did the Europeans the favour, this weekend, of reminding them that it could be re-described in the interests of some market "shock and awe".

We don't know much about how the Eurozone special vehicle would work. Truth be told, eurozone officials don't either. After all, yesterday morning, it wasn't even a thought in their heads - let alone a plan.

When eurozone officials went to bed on Saturday, the 60bn euros souped-up European Commission lending facility was the only concrete proposal on the table.

Only after a lot of urgent re-education by American, British and Japanese officials did the eurozone reluctantly come to the view that they needed more. A lot more.

So, yes, the lack of fine print is understandable. But if there's any lesson of the past few months is they need to sort it out, fast. Investors are going to have plenty of questions about how the vehicle would work, what kind of seniority it would have with regard to other debt, and so on and so on.

If officials can't answer these questions fairly soon, with a clear timetable for how each parliament will do its part, the honeymoon in the markets will be short indeed.

Of course, the biggest short-term question is how the Germans will square this with their Constitutional Court - not to mention German voters.

On the face of it, this agreement is at odds with the Court's 1993 judgment on the Maastricht Treaty, which said that stability is an "unalienable basis for Germany's participation in a monetary union".

Any violation of this principle would undermine the legal basis for Germany joining the euro in the first place. Arguably, the No Bail-Out clause of the Lisbon Treaty was one of the key pillars of the system.

Over the weekend, the Court refused to issue an injunction against the German piece of the Greek support programme, endorsing Chancellor Merkel's view that delaying the deal now would be too costly.

But it could still find the Greek package unconstitutional, on the basis of a legal challenge that has been brought by five German academics. On the face of it, the creation of a gigantic new vehicle for bailout out governments looks even more problematic.

Here's the obvious Catch 22 for Chancellor Merkel: if this commitment to safeguard the euro is real, then the eurozone countries - including Germany - now stand behind a significant part of eurozone government debt.

The Court might well judge that to be inconsistent with the terms on which Germany entered EMU. But if Chancellor Merkel insists that it doesn't mean that, that Germany's fiscal sovereignty has been retained - then clearly investors will ask what that 440bn euros really means.

As I suggested last week - one test of all this will be what happens to bond market spreads within the eurozone over the next few weeks and months.

If the core countries have now taken on a collective commitment to stand by a good chunk of eurozone sovereign debt, you would expect, not just Greek yields to go down, but German yields to go up. We shall see.

Clearly, there is plenty that could go wrong in the next few days and weeks. Investors will also need to hear more from Spain and Portugal about how they are going to further squeeze their budgets. Both governments fought against it over the weekend, but there will be announcements in the next few days.

But assume (and it is a brave assumption) that the package survives the scrutiny of the markets over the next few weeks. There is an even bigger question hanging over the package.

Put simply: it tackles the symptom of the problem, by making it easier for the high borrowing countries in the eurozone to pay their bills.

By itself, the deal doesn't materially change the amount that eurozone governments will have to borrow over the next few years. And it doesn't even begin to talk about addressing the reasons why countries like Portugal are borrowing so much in the first place.

Indeed, by promising more fiscal action, across the zone, it actually makes it worse, by making their growth prospects even weaker than they were before.

I will have more to say on that, and on the ECB piece of the package, in a later post.

Update, 16:50: A few numbers to throw light on my earlier comments. The new 440bn euros firewall for eurozone governments would amount to about 6% of outstanding eurozone government debt, which was just over seven trillion euros in 2009. Throw in the 80bn euros promised separately to Greece, and you're talking about 7.5%.

So, the Germans could reasonably argue that this special vehicle is far from a blanket guarantee of the eurozone's debt. But, arguably, on this occasion, the flow matters more than the stock. And the principle matters most of all.

Collectively the eurozone countries borrowed 565bn euros last year. So, in a few short weeks, these government have collectively agreed potentially to underwrite nearly a full year's borrowing. The implicit guarantee for the countries that are likely to be affected by the deal is much bigger: after all, the entire Portuguese deficit last year was 15bn euros. Spain's was 118bn.

That is getting very close to a fiscal union, at least in terms of the implicit liability for core members like Germany over the next few years. Whether they will be getting a more stable eurozone economy in return for that new liability is still today an open question.