Labour: A 'fair for all' manifesto?

Careful. That's the word that jumps to mind most often in reading through the Labour manifesto. The Conservatives have jumped to say there are no new ideas in the manifesto. I have to assume that is unfair. But there are certainly no new ideas on how to cut the deficit. 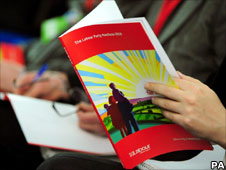 There must be the odd idea in the document which we have not seen Labour formally commit itself to before. But, reading through with an eye to what costs money, or affects the economy, I have yet to find a significant proposal that has not been included in a previous Labour policy document.

OK. That's not quite true. As far as I know, they have not publicly committed to trebling the amount of secure cycling storage at rail stations before. As a cyclist, of course I'm thrilled. But this is not the stuff of exciting headlines.

Given that Labour is vesting everything on being the party of experience - the party of seasoned judgement, not "back of the envelope" guesses - you can see why they would decide that "safety first" was the way to go.

There are some "promises" in the manifesto that have already happened: for example, they say they will give disabled children an extra £100 for their child trust fund. But that was announced last year, and the children started receiving those payments at the start of the month. That's a bit cheeky.

But, by and large, Labour officials aren't denying that we've heard all of it before. In a sense, they are even proud of it.

Why? Because if it's not new, then it's not new spending, either. Every time I query, say, the "new toddler tax credit", or the £40 per week "better off in work guarantee", Labour officials helpfully point me in the direction of the paragraph of the Budget - or last year's pre-Budget report - where it was first proposed.

As far as I can see, this document is fully costed - and where it is not, Labour has made sure we cannot formally prove it.

For example, they have strengthened, slightly the commitment to restore the earnings link with the basic state pension. In the 2006 white paper on pensions they said "our objective, subject to affordability and the fiscal position, is to do this in 2012, but in any event by the end of the Parliament at the latest." In the manifesto they are dropping the caveats about affordability and the fiscal position.

On paper, this is one of the most expensive promises in the document: the Treasury has previously estimated that not linking to earnings saves them, on average, about £700m a year. But, since the government has not given us the Treasury's forecasts for social security spending after 2011, we have no way of knowing whether this cost is included in the chancellor's plans or not.

So we are back to the basic problem: that this very cautious, seasoned government is not willing to give us detailed spending plans extending more than 12 months ahead. Labour have given us more detail on the central issue of this campaign - cutting the deficit - than the Conservatives have so far. They at least have some headline forecasts, and some detailed tax rises.

But it would have been good to have more details today, from the party now in government, of the major fiscal adjustment that Britain is facing over the next five years. Alas, they're being very careful on that subject as well.

Update 1817: The IFS have put out some comments on the manifesto, highlighting the same basic issue. Their note is worth reading in full. But here are some choice nuggets:

"The key question for the next Government is what size and combination of public spending cuts and tax increases to implement to repair our public finances. Anyone looking for a more detailed answer from Labour in its manifesto will have been disappointed. The party listed plenty of new things it would like to do, but was no clearer about where the spending cuts would fall. And it listed a few tax increases that it promised not to implement, but left the door wide open to many others."

The IFS calculates that the since 1997 the government has brought in net tax increases:

"...that will cost families £31.1bn this year (£970 per family) and almost half as much again - a total of £45.4bn (£1,420 per family) in today's terms - by 2014-15, once the tax increases already announced in recent Budgets and pre-Budget reports for implementation during the coming Parliament take effect."

The widest measure of the total tax burden (total government revenue as a share of national income) has also risen since 1997, but by less than than the value of Labour's announced tax increases, because of the fall in revenues due to the recession and the collapse in revenues from the city.

Another killer fact: as the authors note, most OECD countries have seen their tax burden fall as a share of the economy since 1997. If the burden of UK taxes had fallen by the average amount of other OECD countries over the period, they calculate that it would now be "3.3% of national income below that forecast by the OECD for this year - a difference of £49bn in today's terms or £1,520 per family."

If that can be reduced to a catchy soundbite, you can bet the Conservatives will.