All eyes are on Brussels, as we await more details of the "co-ordinated measures" on offer to help Greece. There's just one problem. Even a bail-out - if that is what it turns out to be - won't solve the basic problem facing Greece, or the eurozone.

Let me explain. Greece has two big problems: a debt problem and a competitiveness one. A "bail-out" won't solve either - at least, not a bail-out that any self-respecting German would be willing to consider.

We may get a bit more clarity today on the support that Germany and others are planning to offer Greece. More likely, as I said yesterday, we will have to wait until the next week's meeting of European finance ministers. That is what today's statement suggests.

But we can be fairly sure that whatever deal is struck, it will not make Greece's debt problems go away.

The best that Greece can expect from its eurozone partners is a promise to underwrite Greek debt, or some form of bilateral loan to tide Greece over. The first would cut the risk premium on Greek debt and make it easier to service. The second would give them cash to get them through the next few months, when nearly 10% of their debt comes up to maturity.

But neither would do much to lower the stock of debt hanging over the economy. Or lessen the need for swingeing cuts in public services and tax rises over the next few years. Indeed, if Berlin has anything to do with it (and we know it will) - Mr Papandreou's government could come out of this with an even tougher schedule for cutting the deficit than it had before.

So, it won't make the debt problem go away. It probably won't make the burdens on the Greek government - or its people - that much easier. It just goes from being 'impossible" to merely "intolerable".

It goes without saying that it won't solve Greece's competitiveness problem either. I promised a post today on the long-term structural problem underlying this eurozone crisis. Happily - or perhaps unhappily - Martin Wolf beat me to it, in a superb column in yesterday's FT. As he says:

"So long as the European Central Bank tolerates weak demand in the eurozone as a whole and core countries, above all Germany, continue to run vast trade surpluses, it will be nigh on impossible for weaker members to escape from their insolvency traps. Theirs is not a problem that can be resolved by fiscal austerity alone. They need a huge improvement in external demand for their output."

As I showed in my piece for yesterday's BBC News at Ten, it's no accident that the countries in the firing line in this crisis are also the ones whose competitiveness has deteriorated the fastest within the eurozone since the single currency began.

This chart tells the story, from Janet Henry at HSBC. 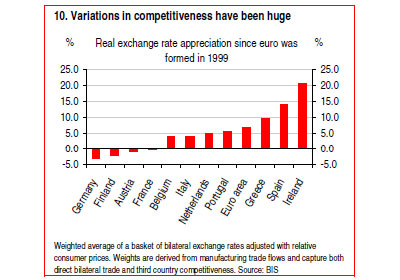 German unit labour costs have barely budged since 2000, and German inflation has been lower than the eurozone average. As a result their exports have gradually become more and more competitive in world markets. Whereas Greece, Spain, Portugal and the rest have had relatively higher inflation, faster wage growth, and thus growing unit labour costs - and falling competitiveness.

This is why there is no comfortable route of this for the Pigs (Portugal, Italy, Ireland, Greece and Spain) - though for some the path is tougher than others.

As I've said many times in the context of the UK, it's tricky to cut borrowing as a share of GDP when your GDP is itself shrinking or stagnant. It is more or less unthinkable that Greece would manage to do this and achieve the real cuts in wages and living standards that would be necessary to seriously improve their competitiveness within the eurozone.

Martin Wolf says that higher German domestic demand is the solution (or a big part of it). That would certainly help. So would a weaker euro - though remember, in the current situation, the biggest beneficiaries of a weaker euro would be German exporters.

But imagine you were coming to the situation for the first time. You knew nothing of the Bundesbank. Or the history of the single currency project. Or even the market impact of the failure of Lehman brothers.

If you were such an unworldly creature, you might come up with two, more ambitious proposals for tackling Greece's fiscal and competitiveness problems head-on: debt restructuring for Greek bondholders; and a higher inflation target for the ECB - say, 4%, instead of 2%.

I touched on the first of these, briefly, on the Today programme this morning.

If you could pull it off, restructuring Greece's debt (with some suitable "haircut" for private bondholders) would actually lower the real burden of its debt, making the path out of this more plausible. Of course, Greece would pay a price for it in the markets. For a long time. But it's not as if it's never been done. And it's not as if the alternative path for Greece is much brighter.

"Unthinkable", you may say. "Remember what happened after Lehmans was allowed to go bust - and everyone in the world holding private bank debt started wondering whether they were next?"

The memory of that is indeed one of the many reasons that a debt-restructuring is not being seriously considered. You could be looking at Lehmans, cubed, if the markets started seriously questioning every developed country sovereign bond.

But the international community has now accepted that we need ways to restructure private debt without all hell breaking loose - ways to make private bondholders bear some of the burden when banks get into trouble, not just taxpayers. A few years from now, I wonder whether we will be saying the same about sovereign debt problems as well.

This post is so long already - and this is so unlikely to happen - that I won't belabour the point. But this is something that was discussed, a little, when the euro began, and especially when the membership extended beyond the European "core".

Arguably, a higher inflation target for the eurozone would help the less developed economies on the periphery grow faster in real terms, not just nominal. It could also make it easier for countries at the periphery to cut labour costs in real terms - without actually lowering people's nominal wages or suffering deflation. And it could weaken the euro, which might help growth as well.

A 4% inflation target for the ECB wouldn't solve the problems at the periphery. You would still need more domestic demand in Germany, and some tough structural reforms in Greece and the rest. For all these reasons, the short-term benefits of slightly higher inflation could easily be frittered away. But it might, just might, move things in the right direction.

Pity that the eurozone members cannot even raise the question. Let along make it happen.