US dominates Davos from afar

Davos: Once again, the Americans are dominating Davos. And they're not even here. Or not yet anyway.

Last year the delegates forgave the new Obama administration for not sending senior figures here. His presidency was only a few days old. And there was the small matter of a global financial crisis to fix.

The timing's bad again this year: President Obama will be giving his crucial State of the Union address tonight, and more than ever, senior officials need to be there in Washington to back him up. 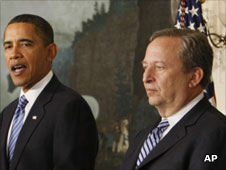 Larry Summers, the president's senior economic advisor, will be the administration's sole representative here. And he doesn't arrive until lunchtime Friday.

This is a major source of frustration for many delegates - and certainly the organisers. Why? Because - as Robert Peston has discussed -last week the Obama administration turned the Davos agenda upside down.

Seven days ago I thought I would be here discussing the strength of the global recovery, the potential for future sovereign debt crises, and the challenge of re-balancing the global economy - along with continued and important discussion of international financial reform.

Now - all anyone can talk about is Obama's plan to break up the banks.

Robert has outlined some of the bankers' responses to Obama's plans. I've been talking more to officials than to bankers. They, too are worried that the administration's have not been fully thought through.

But my sense is they are less focussed on the substance of Obama's proposals than on what they tell us about the political strength of the administration - and the balance of power within it.

A few months ago, at the time of the G20, it was clear that Tim Geithner and Larry Summers were in charge of US policy.

Witness the careful and determined opposition to widespread - US and global - calls for caps on banker bonuses.

Now the pendulum appears to have shifted - in favour of more populist rhetoric, and the ideas of Paul Volcker.

At least, that's the popular interpretation. Perhaps when we hear from Dr Summers later in the week we will get a better sense of whether it's true.

But it won't just be Americans that will be paying attention to this State of the Union. There could be some avid - if weary - viewers in Davos as well.