Perhaps we should call it the Office of Negative Statistics. Almost to a man - and woman - economists had expected a modest, but respectable growth figure for the UK in the final quarter of 2009. 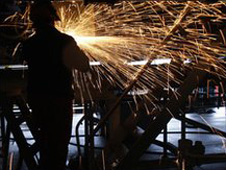 But the Office for National Statistics (ONS) tells us that it grew barely at all - by just 0.1%. It's a recovery - but not, if you'll forgive the jargon, a statistically significant one.

Three quick points about this meagre outcome. The first, naturally, is that the number will almost certainly be revised, and in recent times the average revision has been positive.

This is especially true when you consider the full three years when data is still coming in, rather than the first three months, when everyone's paying attention.

But the second is that blaming the ONS can only take you so far.

Even with some revision - in fact, even if it turns out that the economy actually started to grow in the third quarter, given that the first estimate of a decline of 0.4% has already been revised up to minus 0.2% - we are still talking about an extremely lacklustre recovery.

Finally, I think this is bad news for both of the major political parties. It's a blow to the government, because they would prefer to have a bit more evidence for their claim that Labour policies has softened the impact of the recession.

The last three months of 2009 was the period when the VAT cut was supposed to have had the greatest effect.

Of course, we don't know the counterfactual - it's possible that the little growth we had in the last three months of 2009 was due to people spending before VAT went back up to 17.5%.

Ministers will also point to the strength of the motor industry, but the claim will ring rather hollow on the back of 0.1% growth overall.

In fact, it might be better for the government if the temporary stimulus did not have a big effect on the last three months of 2009.

Why? because If consumers did bring forward spending from the start of the year, that suggests the growth figure for the first quarter of 2010 could be even worse than this one.

Even worse than 0.1% growth means no growth at all. And - wouldn't you know it - we'll get the first estimate of that figure will come out on April 23rd, probably in the last stages of the campaign.

But I'm not sure that a weak recovery plays that well for the Conservatives either. They are being painted as a party keen to clamp down on public spending - and borrowing - from their first days in office.

Even if that's a caricature of their position, it's a caricature that they have broadly accepted. The weaker the recovery, the easier it may be for Labour to argue that the economy is too weak for shock therapy just yet.