Davos: It's "decoupling" day in Davos. Or that's how it feels. Everyone's talking about the Eastward shift in the balance of global economic power - and China, especially, as the key engine of global growth in 2010. 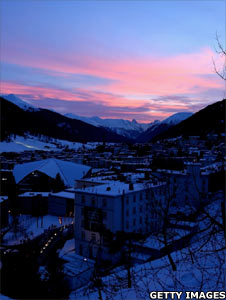 Even the World Economic Forum is moving its centre of gravity Eastwards. The WEF is holding a special Davos-style event in Tianjin later this year. "At least it might be a bit warmer," one Central Bank President muttered to me while brushing the snow off his coat. We're expecting 12cm of snow here today, and not everyone came well-equipped.

But "decoupling" doesn't seem the right word for what's happened to the relationship between the emerging and advanced economies. A better word would be "deconstructed".

How so? Well, it's certainly true that the emerging market economies have brushed off the troubles of the major developed economies in fine style. A year ago, one of the things that was making participants extra-gloomy about the crisis was the perception that the developing economies were being sucked into it as well. News was coming in of mass lay-offs in Brazil, as domestic car production fell off a cliff. Exports across Asia were falling at double-digit rates.

But for many of those economies, all that now seems like just a bad dream. Most of the Asian tigers have come back roaring, their long-term development story intact, and their position relative to the US and Europe rather stronger than before.

HSBC hosted an interesting breakfast on the subject this morning with the FT. A new report by HSBC's chief economist has the key headlines for the story:

"No longer is it possible to argue convincingly that the US or European nations determine the agenda for the world economy as a whole. 2009 will surely go down as the year when we both uncovered the scale of the crisis in the developed world and celebrated the resilience of much of the emerging world in the face of what appeared to be a perfect economic storm. We found, in particular, that China was able to stand on its own two feet, capable of delivering rapid economic growth even while its export engine was badly misfiring."

It's all true. It's also true that China has some important challenges to address in managing its economy - short-term and long-term, which will have important consequences for all of us.

But I wonder whether we've gone from expecting too little of China to expecting far too much. That's what I mean when I say the relationship has been deconstructed.

China does indeed need to rebalance its economy in favour of domestic demand. I've written a lot about that in the past, and there was much talk about it this morning. Reducing its chronic over-saving will help deliver more efficient, and more sustainable economic growth in China. And it will help the rest of the world as well.

But it won't magically provide a new engine for US and European demand. Nor will it make the problem of global imbalances go away.

This might sound obvious. But listening to the rhetoric of US politicians in Washington - not to mention many economists and officials here in Davos - you could easily come away with a different view. 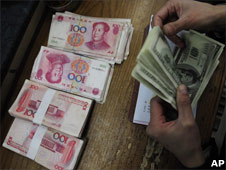 The way US congressman tell it, all that's needed to transform the outlook for US exports (and jobs) is a stronger renminbi. And even the likes of Martin Wolf, the FT's distinguished economic commentator, can sometimes give the impression that a balanced China will balance the world.

It won't. For the simple reason that China, for all its new ascendancy, is still just one economy - about one-fifth of the size of the US.

As the UBS economist Larry Hathaway points out, even if the Chinese current account surplus (in effect, the "excess" that it lends to the rest of the world in return for buying so many Chinese goods) fell to 2% of GDP over the next few years, instead of the 6% of GDP now forecast, at most that could only add about 0.2-0.3 percentage points to US and European annual growth. And that's if those countries were able to take full advantage of the shift in demand. It's far from clear that they would.

True, in their current state, the US and Europe will take every scrap of growth they can get. But it's not the solution to global growth or global imbalances. Nor are you going to make it happen by simply pushing up the Chinese currency.

If there's one thing that the average Davos participant and the average US congressman has in common it would be a fervent belief that the Chinese need to revalue. They do - and the signs are that they will, probably in the second half of this year.

But remember, we've had enormous swings in the value of the dollar and of the yen in the past 30 years. It hasn't made a big difference to the rate of growth of imports or exports in the US - or the Japanese desire to save.

China's going to play an increasingly pivotal role in the global economy in the next few years. But it's one piece of the global economic puzzle coming out of this crisis. It can't solve the whole thing.