The Budget that has barely budged

Everything changes - and everything stays the same. Continuing my earlier theme, the chancellor has announced a lot of small things but not changed the big picture - which is that he will not spend very much over the next few years, and will halve the deficit as a share of GDP. 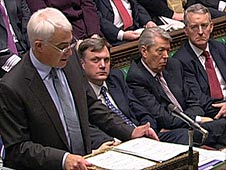 There were all those expensive-sounding announcements - all that help for businesses in recession that he is "extending", the cut in bingo tax and the rest. But miraculously, the amount he's planning to spend next year has barely budged. He said total spending will grow by £31bn in 2010-11 - or by 2.2% in real terms. At Budget time, the forecast was for a rise of, er, £30.3bn in Total Managed Spending in 2010-11 - or growth of 2.9%.

Likewise, he now says current spending will grow by 0.8% a year in real terms after 2011. At Budget time, he was expecting it to grow by 0.7% a year over that period. I suspect the difference may be partly explained by that £3bn tax rise to pay for a further increase in health and other spending in 2011 - but, as ever, I can't be sure until I see the fine print.

UPDATE, 13:54: I was right about the structural deficit. The Treasury has revised down its estimate of the true "hole" in the public finances - the part of borrowing that won't go away as the economy recovers.

At the time of the Budget, he expected a structural ("cyclically adjusted") deficit of 8.9% of GDP in 2010-1. That's now come down to 8%, probably because GDP itself is going into 2010 smaller than they thought.

That fall follows through to 2013-4, when the structural deficit is now forecast to be 3.6%, not 4.5% as in the Budget. That's making it a bit easier for the chancellor to meet his headline goal for the deficit.

But deficit hawks will note that he has not used this improvement in the underlying picture - if it really has improved - to speed up his efforts to cut borrowing. That is what the IMF and others have urged in the past - that any "windfalls" that came the chancellor's way should be put into faster deficit reduction.

The prime minister will be relieved that the chancellor resisted the "temptation" to do this, six months before a general election, (some temptation...). But he's missed the chance to win extra points from the likes of Mervyn King.

UPDATE, 15:10: A tiny addendum to my comments on the structural deficit.

You might be wondering how the poor performance of the economy this year has reduced the hole that the government needs to fill. (If you want to cut structural borrowing, tank the economy - who knew it was that easy?)

Let me explain: they expected the economy to shrink by 3.5%. Instead it shrank by 4.75%. Yet, borrowing is more or less unchanged.

Ergo, they must have been wrong about the amount of borrowing that was due to the state of the economy. If they'd been right, borrowing would now be much higher than expected - and backbenchers would have had more to jeer about when the chancellor read out the numbers.

So, to repeat myself, the structural deficit appears to be smaller than we thought. At least, if this new estimate is right. We might find out, next year, that the first set of forecasts was right after all.

The lesson is that the dividing line between "cyclical" and "structural" borrowing is as porous as a sponge - and some would say, not much more useful for setting economic policy.

Estimates of the "structural" deficit are useful for informing discussion of the budget squeeze ahead. Every decent forecaster has to have one. They're a useful guard against the political temptation to wait for growth to magic all the borrowing away.

Just don't make the mistake of thinking the numbers are set in stone.

As of today, we have a new Treasury estimate of the amount that taxes "must" rise, or spending "must" fall, in the next few years to bring borrowing back on a sustainable course.

But if history is any guide, the truth will be much worse than they think. Or much better.