Economists, at least the macro variety, didn't have a good financial crisis. And they're not having much of a recovery either. Much like the UK.

You may remember that I wrote about the dismal state of the dismal science back in the summer. There's been a lot of talk about economists' role in causing the financial crisis, and it's an interesting debate. But not nearly as interesting, to me, as the question of where economics goes from here.

Somehow, somewhere, large parts of the profession seem to have lost their way - or at least lost their connection to the world as it is.

I've been talking to some heavy hitters inside and outside the profession to find out what economics needs to find its way back. You can hear the results of those conversations in a Radio 4 Analysis programme that first airs on 2 November.

I spoke to Professor Myron Scholes. He was pretty unrepentant, even though he won his Nobel Prize for helping to make modern financial derivatives possible. He also started a hedge fund, Long-Term Capital Management which created a mini credit crunch of its own, running up losses of more than $4.5bn in just four months in the summer of 1998.

But Charlie Bean has had to experience the gaps in modern economic thinking first-hand over the past few years, first as chief economist, now deputy governor of the Bank of England. He says you don't need to devise a lot of fancy new economic theories to explain what went wrong. But he does think that economists need a greater understanding of history - and their own limitations. 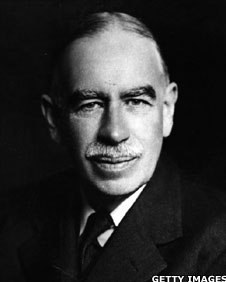 For Lord Robert Skidelsky, Keynes' biographer, it's all been further proof that economists lost their way when they departed from the master. Keynes understood uncertainty. If economists want to catch up with the way the world works, he thinks they're going to need to find a way to incorporate it too.

Large chunks of economic life could not be reduced to a set of probabilities. That, in turn, means they can only imperfectly translate into mathematical models.

"...in order to get determinate results, you can't have unknowns. And therefore to make the maths possible ...you have to theorise on the basis of perfect information and prices always being correct and so on. Now just... reduce the amount of maths in the subject and you get closer to real life."

In other words, the stuff you can count isn't necessarily the stuff that counts.

But for me, the most interesting contributions came from Richard Thaler, the leading behavioural economist, and Michael Sandel, a distinguished political philosopher at Harvard who taught me many years ago.

Thaler and his fellow travellers have had a good crisis. Ever since he co-wrote Nudge, politicians and policy wonks have been rushing to incorporate Thaler's ideas into policy - for example, we've had more discussion today of forcing people to decide whether or not to be organ donors. That's the fruit of experiments showing that we make different decisions when we are forced to choose, than if we can simply follow the path of least resistance.

Thaler had a good take on the failings of mainstream economics going into the crisis, particularly financial market economics. He said it partly grew out of a failure to distinguish between easy problems and difficult problems:

"We have the idea that people optimise, and they optimise regardless of how hard the problem is. So let's contrast two problems. One is figuring out how much milk to buy when you go to the grocery store. Now you know that's an inventory problem, we could write down the mathematics of it, but most families pretty much know how to do it and they do it through trial and error. So that's an easy problem in part because there's lots of opportunities for learning. Now compare that with, say, playing chess. No-one plays chess perfectly, even Gary Kasparov - otherwise the game wouldn't be interesting, it would be solved - and most of us play horribly. Now a theory that says we buy milk and play chess equally well is just preposterous. We need to accommodate degree of difficulty.

Now the way this relates to the banking crisis is that being a banker has just gotten a lot harder. If you go back to the world of the banker in that Christmas movie... It's A Wonderful Life, you know that guy was making loans to people he knew in his town. And you know that's a pretty easy problem. Now if, if you're buying and selling mortgage-backed securities, that's pretty hard. And if you're running a bank that has a hundred divisions, each of which are engaged in highly complicated transactions, the job of being a CEO has become immensely difficult..."

On this view, it's not just that the financial deals themselves were getting more complex - it's also that the economic models were assuming they had gotten easier.

"The models kept assuming people were smarter and smarter, but the world was getting harder and harder and so the models were getting further away from reality. So if banking was like in It's A Wonderful Life, then the old models might be fine. But when you have Citibank selling liquidity puts and the vice chairman of Citibank admitting later that he had never heard the term 'liquidity put', then you know you're dealing in a completely new world."

It's a great critique - but, as Thaler would be the first to admit, it is more a critique than a competing theory.

Useful though it is, you're not going to be able to base the future of economics on behavioural economics alone. Why? Well, for one thing, it doesn't lend itself very readily to concrete advice. Politicians like their economists to tell them what to do, even if they ignore them afterwards.

Behavioural economics isn't like that: it shows you that it matters how, exactly, a policy is designed - what the default options are, or how medical evidence is presented. We'll opt for an operation if it has a 90% success rate, for example, but not if the chance of dying on the table is 1 in 10. But it doesn't tell you which to choose. Economists who like to draw a sharp line between objective economic analysis and subjective value judgments think that's a big problem.

Funnily enough, outsiders like Professor Sandel thinks that's the great strength of that kind of economics (he's not a big fan of the other types). It brings the value judgements to the surface, rather than burying them deep in the assumptions of the models.

"I was interested in the economists [in the Obama Administration] who were making this critique. They said it's terribly greedy. What I wish the journalists had asked them was is there a distinction between greed and self-interest, do you think?

Strictly speaking, no mainstream economist would recognise any such distinction, and yet for political purposes they attack greed as if it's a thing independent of self-interest... Citizens generally who looked at this - at the bailouts and the bonuses and been outraged - they believe there is a difference between greed and self-interest. But there's no way of capturing that intuition in economic analysis because, according to economic analysis, in any case one is deploying self-interest or greed, which is simply self-interest squared, to serve a social purpose. That's what the economic model says. And you have to introduce some normative assumption about what is excessive pursuit of gain in order to make sense of greed as a vice independent of the self-interest that all of the economic models presuppose. So I think there are intuitions in everyday life that people have that the economic models simply don't capture, and greed is one of them."

I suspect that it will take more than a financial crisis to make Wall Street economists want to think about the quest for justice as well. But the economics being taught at universities around the world this autumn has already been changed by the events of the past few years.

It will change even more in the years to come, though don't expect it to happen quickly.

Professor Thaler reminded me of an old line: that "science marches on funeral by funeral". Most economists don't like admitting they've changed their mind about anything.

Analysis is on Radio 4 at 2030 on 2 November (repeated 2130 8 November) and will be available online to listen again for a week.