When Mervyn King does cautious optimism, you can keep the emphasis on cautious.

The Bank's new forecast for the economy is rather more upbeat than it was in August, and to judge by the "backcast" for GDP, it expects some upward revision of not just that disappointing third-quarter decline in output, but some earlier ones too (though not the kind of dramatic change to the picture predicted by the likes of Goldman Sachs).

Lest we get carried away, the governor insisted that the risks to the GDP forecast were on the downside. As he repeated many times at the press conference, the big picture was that the UK and other advanced economies faced "a long hard path" back to where we were. That has not changed.

The Bank's best guess is that we won't get back to the level of GDP before the
recession hit until at least the latter half of 2011: 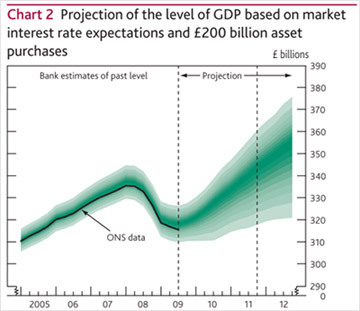 And yet... even the Bank accepts that there is something odd happening in the labour market - and it's odd in a good way.

As the chart below from the Inflation Report shows, even before today's news, employment had fallen by much less than the fall in output would have led you to expect. 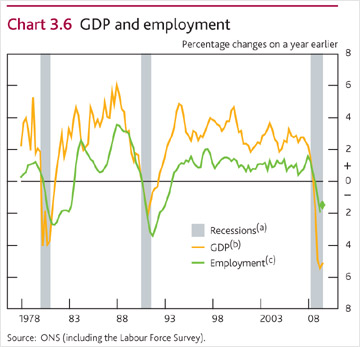 The October jobless figures only make the point more starkly - by either the quarterly ILO measure or the monthly claimant count, unemployment has risen by the smallest amount since the recession started last spring. This is not what anyone would have predicted even six months ago.

As the Bank points out, we can't declare a bright new world just yet. It could be that more onerous consultation arrangements and so on are making it harder for firms to lay off staff quickly. The largest rise could be yet to come.

But as I have said before, there has clearly been much more downward adjustment in wages and hours than in the past - including a sharp rise in part-time employment, as seen in today's data.

That has not done anything to help young people, as the figures show. And the squeeze on incomes is bad news for families who were already struggling - and for demand economy-wide in the future.

But given the long-term cost of being out of work - for individuals and for the economy - the slowing rate at which people are losing their jobs overall has to be cause for good cheer, however cautious.

Share this page
[an error occurred while processing this directive]