House prices: Too good to be true?

The average price of a house in the UK is now the same as it was a year ago - or so says the Nationwide. But even estate agents are wary of calling the turn of the cycle. And for good reason.

Of course, prices are still lower than they were - on average, prices in the Nationwide's index have fallen 13.5% since their peak in October 2007. But if you'd wagered a year ago - when the world was ending in the financial markets - that house prices were going to stabilise about six months later and be back to the same level within a year, you would have found plenty of people happy to be on the other side of your bet. 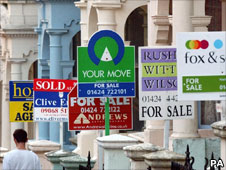 Is it too good to be true? I know better than to try to call the market - though, from the number of times I'm asked about it, it seems that many people think it's the most important part of my job. But here are two reasons to think the rally may run out of steam: one from Nationwide and one from the IMF.

Reason number one is well known but important: house prices are rising in a market where very few properties are changing hands. As the Nationwide points out in today's report, the housing turnover rate - the percentage of the private sector housing stock changing hands on an annualised basis - is still only 4%. That's not much higher than it was at the end of last year, when literally no-one in the market wanted to do anything. Before the crash, turnover was 7-8%.

You might expect prices to carry on falling in a market with such little activity - because usually low turnover reflects the fact that everyone expects prices to fall. But the relationship breaks down if there's only a tiny number of houses up for sale. That seems to have been true for most of this year and it's still true.

Nationwide thinks a lot of people have become "accidental landlords": with interest rates so low, they've been able to buy a new place but rent their old home, rather than selling outright. The authors say the resulting increase in the stock of rental properties explains why house prices have been rising for five months now - while, if anything, rents are now lower than they were last year.

The signs are that this stock of rental properties is now starting to fall off. If that happens, they think prices could go down again.

But that's the short-term dynamic. The more fundamental reason why prices might start falling again is that, by most measures, they are still significantly over-valued.

The IMF folk compare that historical picture with what's happened in individual markets so far. They then go back and run more complex models with measures of affordability and other data. The conclusions are broadly the same: prices in the UK, Spain and Denmark all probably have quite a long way further to fall - in the UK's case, maybe another 12-13% in real terms. Whereas the US and Germany are probably close to the bottom. Remember this is about house prices in real terms, after inflation. You could get that 12% real decline if prices stayed flat for a while - but if inflation stays this low, you're talking quite a few years.

Capital Economics have a similar analysis (see graph below). They reckon prices would need to fall by at least another 20% in nominal terms to reach fair value. And many agree. 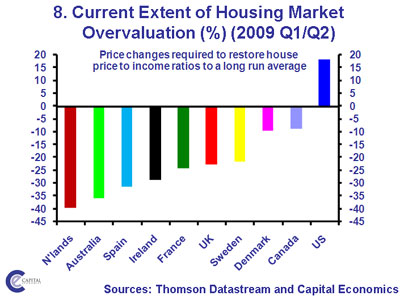 If prices stagnate, or fall further, there'll be plenty who worry about the knock-on effects for confidence and the economic recovery. But it would be good news for young people who are otherwise bearing the brunt of this economic bust.

From an economic standpoint, the rise in house prices since the early 1990s has been a massive transfer of wealth from young wannabe home-owners to the older generations who bought when the going was good. It's worked like a tax on young people -and a windfall to large numbers of the middle-aged and old.

One way or another - whether through higher lifetime taxes or unemployment at a crucial time in the career - young people are going to be paying for this crisis for a long time to come. It would be no bad thing if they could at least come out of it able to afford a home.