It turns out the UK economy has moved a lot more slowly in the past few months than the surrounding debate. 'Twas ever thus. 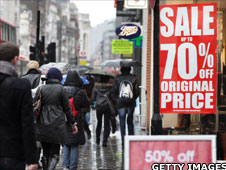 If the first estimate for growth in the second quarter is right, Britain's national output is still shrinking. And not by a little.

If this were the US, where GDP figures are presented on an annualised basis, we'd be talking about the economy declining at a rate of more than 3.2% in the second quarter. Perhaps it's just as well that we're not. But however you dice it, the 5.6% decline in GDP in 12 months is the worst since these records began in 1955.

Two points of perspective: first, though the 0.8% estimate is clearly at the very low end of independent forecasts, the sheer range of those forecasts in the lead-up to this announcement show quite how hard it is to call the economy right now. Some thought it would be even worse than this. Others were actually expecting a 0.4% rise.

The second point is that, as ever, this number is subject to revision. In the crucial service sector, the ONS only has actual figures up to May. The rest is largely estimated. Coverage of the production sector is better, but even there, the hard numbers often only extend to May.

If we thought the economy was gaining momentum over the course of the past three months, you might expect the figures to be revised up when the second set of figures for the second quarter come out on 28 August. (Or much later - remember it takes up to two years from the end of the quarter for the ONS to get all of the data it needs for the final GDP figure).

Research by economists at Goldman Sachs [see chart below from European Weekly Analyst 09/18 May 14, 2009] has found that later revisions to British GDP numbers are biased upwards - in other words, the ONS seems to err on the side of the under-estimating GDP rather than over-estimating it. They found the same to be true for the Eurozone economies. Whereas American GDP data tends, on average, to get revised down. More proof, perhaps, of Americans' greater optimism - or greater affinity for spin.

But it should be said, this research didn't go back far enough to cover GDP estimates during a recession (they didn't think it was worth it, given that they now measure GDP so differently). The revisions when GDP is falling could easily go the other way.

There's no getting round the fact that I said all of this when the first estimate for growth in the first quarter came out. And yes, the figures were revised. But not exactly in the direction the optimists expected. As you'll recall, the number went from minus 1.9 to minus 2.4.

Also, if we think back, the greatest talk of "green shoots" was actually in the first part of the quarter - April and May. If anything, the data for June has gone the other way (notwithstanding yesterday's strong retail sales figures for June).

Where does this news fit into the big picture? I would say that anyone who was worried about the momentum of the recovery before will be that much more concerned now. Not least, because the recovery has yet to actually show its face. With a modest, 0.2-0.3 % decline in the second quarter, you could say that a third quarter recovery was still on track. It could still happen. But the story is a lot harder to spin.

As I said yesterday, the MPC will be looking far beyond the here and now when it makes its decision on quantitative easing next month. Looking back at the May Inflation Report, the MPC appears to have been expecting GDP to fall by 2.9% in the first half of the year. If this figure is right, the decline will instead be 3.2%.

That's not a huge difference. But you'd have to say that this makes a continuation of the policy a little more likely, albeit in a more subdued form. As economists at Barclays Capital have pointed out, senior Bank officials - including one of the deputy governors, Charlie Bean - are on record saying the MPC was expecting a "small" contraction in the second quarter. This isn't small.

And, of course, it makes it that much less likely that the Treasury will hit its forecast for 2009 of a 3.5% decline overall. From where we are now, you would need growth of maybe 1.5% or more in both of the second quarters to make the numbers add up.

The forecasts for the public finances are pegged to a slightly more conservative forecast of a decline on 3.75%. But I'm reliably informed that in preparing the Budget in April, the Treasury civil servants wanted a gloomier forecast, to allow for the possibility of a 2% decline in GDP in the first quarter (they got that initial first quarter estimate, hours after the chancellor sat down).

No 10 had a different view, and in the end, the forecast was for a decline of 3.25-3.75% this year. For a while it looked as though the data were moving the prime minister's way. Not any more.

Update, 27 July: An earlier version of this post mistakenly said the service sector data extended only to April, not May, for which apologies.