Don't believe the hype. They are still arguing over some parts of the agreement to be signed by G20 leaders tomorrow, but there's no grand ideological battle, over the nature of capitalism, or anything else.

And none of the G20 officials I've spoken to can come up with a reason for the French president to walk out.

The G20 sherpas are still debating the text as I write. But on two of the big issues - stimulus and financial sector regulation - the text is more or less agreed, and very close to where we thought it would be.

There are some disputes at the margins of the financial regulation segment - for example, over how, exactly, to "name and shame" tax havens that don't cooperate with agreed standards on information-sharing. 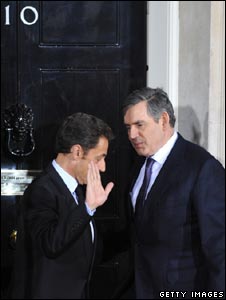 The French seem to be playing these procedural disputes for all their worth - after all, French presidents need victories to declare. But on the broad outlines of the regulatory system that will come out of this process - everyone is on the same page. (As I've written before, that wasn't always true, but it is now.)

The same applies to the stimulus debate. The Americans and British are pushing for clear language that says governments will implement the stimulus measures they have already announced, and do more, as needed, with the IMF given the job of assessing whether countries have done enough. They believe they have now got that commitment, especially given the French President's comments in the Washington Post this morning.

So where are the big gaps? The gaps are numbers - most importantly, the amount of money for the IMF. As of now, Gordon Brown has an extra $250bn for the Fund, made up of commitments by the EU, Japan, China and a few others. That would double the money the Fund has to lend emerging market economies in Eastern Europe and elsewhere.

But the US wants to treble it - to $750bn. It's not clear whether they can rustle up that much extra cash in the next few hours, but they seem to be having a try.

America would put up $100bn (though strictly speaking that's subject to Congressional vote), but that would still leave another $150bn. And they still have to decide how, exactly, the money would get to the Fund.

There are other numbers up for grabs: for example, the amount of money committed to help the poorest countries, and headline figure for trade finance, which should top $100bn though quite a lot of that will already have been announced by national governments.

So, some critical details to discuss, but, once again, don't believe the hype: they're financial, not ideological.