How much is it all going to cost?

The International Monetary Fund often saves its best stuff for Friday afternoons. So it was last week, with the release of no fewer than eight weighty reports on the costs of the financial crisis so far. I wish I could tell you that I had now read every word. But I've read enough to think them worth sharing. 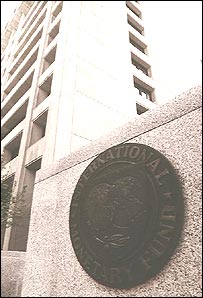 Here are the headlines for the UK.

The IMF reckons that the British government has spent nearly 20% of our GDP - £285bn - in up-front support for the financial sector since the crisis began. That compares to a figure of 6.3% of GDP for the US and an average of 5.2% for the advanced economies within the G20.

That's the money that has actually gone out the door. Adding up the "headline" amounts for all the various schemes to support the banking sector, the IMF reaches a grand total of 47.5% of GDP - or £684bn.

That sounds like a lot, but on this wider (probably less meaningful) measure, we're not even in the top three.

The Irish government, with its blanket guarantee for all the nation's retail deposits, has made financial sector promises with a paper value of 263% of GDP, while the headline commitments of both the US and Swedish governments come to upwards of 70% of GDP.

This study was completed at the end of February, so the UK figures don't include the most recent billions for RBS and Lloyds or the Asset Protection Scheme. Those would push the up-front cost up to well over £300bn and the broader "headline" number up to £1.3tn - closer to 100% of GDP. That might push us ahead of the US on this measure, but the US has also unveiled some big new programmes of its own since this study was done.

The big headline numbers sound breathtaking. But they haven't much value on their own, because you're throwing a lot of apples and oranges into the mix. These tallies don't come close to telling you the figure you really need to know, which is how much this is all going to cost us in the end.

For instance, by far the most expensive financial sector support policies to date have been the Special Liquidity Scheme and the Asset Purchase Facility, both operated by the Bank of England. Between them, these two account for 85% of the up-front cost of the crisis identified by the IMF.

If you talked to officials at the Bank, they would tell you they expect to get the vast majority of that money back. The £185bn lent out in the Special Liquidity Scheme is lent against high-quality collateral, with "haircuts" (discounts) against market value which officials say are in a constant state of review.

On the other hand, programmes like the Asset Protection Scheme involve the government underwriting hundreds of billions of pounds' worth of debt, much of which cannot now be properly valued, still less sold.

No-one thinks they will cost the government the full headline amount being insured (£585bn so far, for RBS and Lloyds). But you wouldn't expect them to cost nothing, either. Since they are "contingent liabilities", zero might well be the figure that appears in the national accounts.

If you think that sounds mad, you will be interested to hear that Eurostat, the EU's statistical body, is wondering the same thing. In the wake of the crisis, it's looking at the statistical treatment of all these support programmes, with a view to putting a lot of this on the government's balance sheet after all.

That could have some more horrendous consequences for the level of UK debt. But happily for the government, Eurostat is not known for its speed. It's still thinking about how to incorporate housing into the standard EU measure of inflation, the CPI, a change that was thought to be "imminent" when Gordon Brown changed the inflation target back in 2003.

To go back to the new IMF figures, you might say that Britain had got its bail-outs in early. We have poured more real money into the financial sector going into this crisis than other countries, but we should also get more back when (or is that "if"?) the markets recover.

Unless the Bank of England has got its lending terms hopelessly wrong, the Special Liquidity Scheme should make only a smallish loss - if not a profit.

So what about the net cost, once all of these various schemes and bail-outs have taken their course? An honest answer would be "nobody knows". But in this study, the IMF has a stab at something more precise.

When all is said and done, it thinks that the net cost to the UK taxpayer of the crisis in the financial sector will be around 9% of GDP. Funnily enough, that is not far off the guestimate that Goldman Sachs came up with earlier in the year. That's on the high side (the average for advanced G20 economies will be just over 7%), but it's not the highest - the net cost to the US is expected to be just under 13% of GDP.

Can we afford it? The IMF thinks we probably can - although, being the IMF, it does think that nearly all governments need to take an axe to their budgets once the crisis has passed.

There's some support here for the Gordon Brown line that we come into this with relatively low debt. Our public debt was 43% of GDP in 2006 - well below the 78% average for the richer G20 economies. By 2014, the Fund now reckons our debt will have risen to 77%.

Of course, these latter forecasts aren't worth much - think how much the UK's forecasts for 2009 have changed in the past year, let alone those for 2014. But if he wants to feel better about the state of the public finances, Gordon Brown might want to take a look at this graph from the IMF report.

It shows what happened to Britain's debt in the first half of the 20th Century. Credit derivatives may have been "weapons of mass destruction" for the 21st Century financial system, but Hitler did a lot more damage to Britain's public accounts.