The cost of taking over the banks

Reading today's public finance figures is a bit like finding out that a team fighting relegation has just lost another match. Disappointing, but not exactly a surprise.

The truly momentous change in Britain's fiscal prospects came last November, in the pre-Budget report. That was when we discovered that the picture of the public finances painted year after year by the Treasury had been fundamentally, unforgivably wrong. Compared to that, today's poor numbers almost seem like small change. Net borrowing in January was about £2.3bn more than the city had predicted.

And the Chancellor looks set to miss his £77.6bn borrowing forecast for the entire fiscal year - the Institute for Fiscal Studies now reckons it will be £87bn. 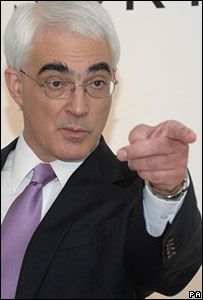 But what's a £9bn or so overshoot compared to the £80bn jump in the forecast for the fiscal deficit between last year's Budget in March and the pre-Budget report. Nearly all of that enormous revision was due to the fact that the underlying (structural) budget was far weaker than the Treasury had thought. And it probably had been for years. Bumper revenues from the financial sector are one of many supposedly fixed features of the fiscal landscape that has turned out to be all too transient.

Corporation tax revenues in January were nearly 25% down on the same month last year. And much of that may be gone for good.

Does the reclassification of RBS and Lloyds by the Office National Statistics change things one way or another? Basically, no. After all, we knew that the taxpayer was a majority shareholder in these institutions. This would just formalise the obligation.

The public debt figures may change - quite spectacularly. When the ONS completes the change, Britain's net public debt could rise from just under 50% of GDP to 150%.

Some say £120bn - 8% of GDP. Others think it will be higher. Still others suspect we taxpayers will make a small profit. We can all agree the cost will not be 100% of GDP.

But there is one way in which the government's ownership of these institutions does make a difference to our fiscal position, even if that ownership is temporary. It gives Her Majesty's Government a lot more foreign currency debt than it did before.

I wrote a few weeks ago about the health of the country's balance sheet - public and private. As I said then, the government is not subject to an emerging market-style debt crisis because it does not issue foreign currency debt.

But our banks do have significant foreign currency liabilities - around £1.5tn. And with the arrival of Lloyds and RBS a fair chunk of those are on the government's balance sheet.

There are plenty of foreign currency assets to put against those liabilities, so the government's net position has not changed.

But, as David Miles, economist at Morgan Stanley, has pointed out, the fact that the liabilities are more liquid than the assets could pose a short-term liquidity problem if there were a run from the pound and people pulled out their cash. Right now, the Bank of England doesn't have enough reserves to deal with that kind of run.

If there were some kind of run and the Bank faced problems, other central banks would certainly rally round. But it would be embarrassing, to say the least.

As Miles says, talk of the UK "running out of money" is far-fetched. But with so many banks now on the government's books, the Treasury has one more reason to preserve at least a modicum of confidence in the pound.