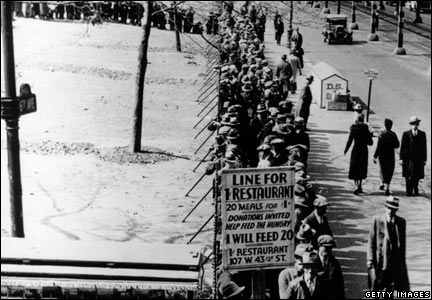 Politicians and commentators keep warning that "protectionism is what made the Great Depression Great". It's a good line. Pity it isn't true.

Before you ask, I'm not endorsing protectionism. Or suggesting it could be a route out of our economic troubles. But it didn't cause the Great Depression.

If that sounds too heretical for the BBC Economics Editor, I should tell you that the US Federal Reserve chairman, Ben Bernanke, agrees.

Academics have been arguing over the causes of the 1930s slump for decades. I can't do justice to the arguments here. But I've been going back over the competing theories. Protectionism and the infamous Smoot-Hawley legislation raising US tariffs in 1930 are surprisingly low on the list.

A crude summary of the state of academic thought in this area would be "Friedman & Schwartz meet Eichengreen, in a world of bank panics and John Maynard Keynes".

Let me explain. In a classic work, Milton Friedman and Anna Schwartz say the US downturn of the 1930s was the Fed's fault, by failing to inject cash into a fragile banking system after the crash of 1929.

At a party for Friedman's 90th birthday, Bernanke (then a Fed Governor), said: " I would like to say to Milton and Anna: Regarding the Great Depression - you're right, we did it. We're very sorry. But thanks to you, we won't do it again."

But didn't protectionism help transmit America's problems around the world? Well, not really. Bernanke, Barry Eichengreen and other distinguished economists have established pretty convincingly that it was the gold standard that helped turn a mismanaged US stock market crash into a global slump - by causing a prolonged and devastating period of falling prices.

It was the gold standard - in effect, a fixed exchange rate system anchored by the price of gold - that led the world's leading economies into a deflationary spiral. That was because the only way for deficit countries to stem the resulting flow of gold - money - out of the country was by shrinking domestic demand, which led to a further downward spiral in prices and incomes.

Since everyone was doing the same thing (and surplus countries like the US were not allowing inflows of gold to stimulate demand), this didn't help countries out of their hole - they just collectively dug themselves deeper and deeper. The first countries to dump the gold standard were also the quickest out of deflation and the quickest to recover.

The depression certainly did see a collapse in global trade and capital flows, and a descent into protectionist tariffs and laws. But a fair reading of the evidence suggests these were more the result of the global downturn than the cause.

According to Peter Temin, a distinguished economist at the Massachusetts Institute of Technology, exports were 7% of American GDP in 1929. They fell by 1.5 percentage points in the next two years.

Given the fall in world demand in those years, not all of that fall can be attributed to other countries' retaliation against the US tariffs. And even if it were - overall, GNP over the same period fell by 15%.

So, on any reasonable assumptions, Temin says "the fall in export demand can only be a small part of the story." And, as he points out, even that loss in foreign demand from the tariff would have been partly offset by the fact that the tariff diverted demand from foreign to home-made goods.

His conclusion? "Any net contractionary effect of the tariff was small."

This shouldn't come as a surprise. Even the greatest fans of free trade would admit that the benefits of lower tariffs - or costs of higher ones - are fairly small beer when compared to the kind of collapse in incomes and employment we saw during the depression.

To repeat, I'm not endorsing protectionism, or a policy of "national self-sufficiency" (though intriguingly for his modern admirers, that's what Keynes supported in 1933).

The world is more interconnected than in the 1930s, and in the financial realm, especially, the crisis is going to require international cooperation to fix. That's not going to happen if countries are at each other's throats.

But in constantly warning against overt protectionism, governments may be once again overstating their capacity to affect events. 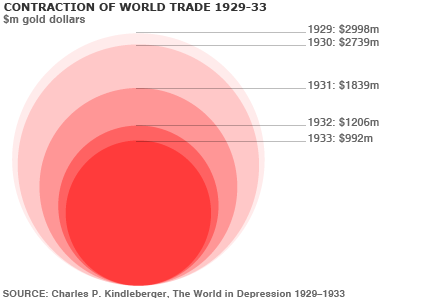 The better lesson of the 1930s may be that you don't need tariffs or a revolt against foreigners to cause a collapse in world trade and capital flows. A fully-synchronised global downturn can do that all by itself.