There are two big messages from the latest US bank rescue plan announced by Treasury Secretary Timothy Geithner. 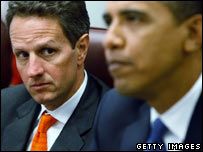 One is that, if anything, the Obama administration is even more neurotic about nationalising banks than its predecessor. The other is that right now it needs to be seen to stretch every taxpayer dollar as far as it can go - even if that might increase the final cost to Uncle Sam.

George Soros has said that the US faces a choice: between partly nationalising the banks themselves, or nationalising just their bad assets. Today's plan suggests that the administration doesn't want to do either.

What started as a "Bad Bank" and then later became an "Aggregator Bank" is now a "Public-Private Investment Fund" which would help private investors take on toxic assets rather than have government buy them directly itself.

As is true of the entire package, the emphasis is on providing a "bridge" to private capital and generally avoiding anything that smacks of public control.

This arms-length-and-even-that-only-when-necessary approach to the dirty business of getting toxic assets off banks' books has another supposed advantage: if the government's not buying the assets, it doesn't have to value them either.

But it's not clear how the valuation issue will be avoided in practice - if you "leverage" a private purchase of an asset, for example, by underwriting the borrowing to buy that asset, that itself relies on some implicit valuation of the asset. The government could still overpay.

It may be that the US Treasury has devised a way round this, but if so, Mr Geithner's speech suggests that it's a work in progress. The objective is to "use private capital and private asset managers to help provide a market mechanism for valuing these assets". Precisely what that mechanism will be is still being discussed.

Of course not buying assets is also cheap - at least at first. As I said, that is the other big lesson of this plan: the administration is trying to spend as little as possible up front. In that sense, the "Public-Private Investment Fund" is attractive to the US Treasury for the same reason that the UK's Private Finance Initiative was attractive to Gordon Brown.

The new Consumer and Business Lending Initiative to promote lending across the economy will be based on a pre-existing Federal Reserve lending facility for exactly the same reason. The Treasury will provide the minimum amount of capital to leverage the maximum amount of lending by the Fed.

There's nothing wrong with trying to get the most lending at the least cost. It's already been harder to pass the fiscal stimulus package than the administration had hoped. It doesn't want to go back to Congress any sooner than it has to.

But there is a risk that penny-pinching now will cost the taxpayer more in the end.

That's true in the narrow sense that these kinds of guarantees leave the government liable for more of the losses on these assets and fewer of the gains.

But there's a more general risk in these minimum-cost, maximum-private involvement approaches. That is that this plan will fail to do what the administration desperately needed it to do: to instill confidence, finally, that the world's most important government will do whatever it takes to put its financial system right.

There was plenty in Mr Geithner's speech that was good. But the market's negative reaction suggests that so far, at least, he has not achieved that goal.

Update Wed 0926: From the comments: "your description of a $1.5 trillion dollar package as 'penny-pinching' and 'minimum cost' really does beggar belief" (Adam C).

But there's a huge gap between that headline number and the upfront cost to the Treasury. And that is precisely the problem.

When you look at the small print, nearly all of that $1.5 trillion is supposed to come from private investors - suitably "leveraged" by a small amount of public capital, or guarantee. At least in the initial stages of the plan, the Treasury doesn't seem to be planning to spend more than the $350bn or so left in the original TARP.

The administration was dealing the hand it was given - if you assume that you can't raise much more money from Congress in future, you get a proposal that looks like this.

But the risk is they will end up with the worst of all worlds - a plan that looks to the average voter like another giant cheque to the banks, but on close inspection by investors looks like too little, too late.