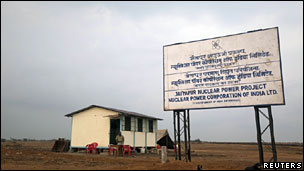 VS Naipaul wrote eloquently of India's million mutinies. Is Jaitapur one of them? Are the protests against the planned nuclear plant there prompted by a familiar and sometimes foggy debate over whether development is driving rural India into more misery, robbing villagers of their land and livelihoods? What do we make of this week's violence in Jaitapur? Was it a genuine outpouring of peoples' anger against a project that they feel will ruin them and "poison" their land and water? Or did the provocation come from somewhere else?

On the face of it, it is all this and more. By all accounts, the violence was allegedly instigated by a right-wing regional party which is struggling to regain lost political ground in the Konkan coastal area where Jaitapur is located. The upshot of such cynical politics: one 'protestor' dead when police fired on irate villagers, at least 20 wounded, a hospital damaged and passenger buses gutted by the mob. A BBC colleague who is travelling in the area reports that many of the locals feel that their movement against the proposed nuclear plant is now "getting lost in the political din". They also blame the right-wing party for trying to "hijack" their movement.

This is tragic because there are much more significant and vexing issues at stake in Jaitapur. After the disastrous tsunami-induced meltdown in Fukushima, Japan, should India reconsider its push towards nuclear energy? (With the landmark nuclear deal with the US under its belt, India can now import reactors and nuclear fuel.) Will acquiring large tracts of land for nuclear power stations again set the government on a collision course with sections of the unwilling - and sometimes uninformed - farmers?

There are no clear answers. Anti-nuclear energy campaigners are unequivocal about their opposition to the plant. They insist that India will have to pay a high social price for nuclear energy.

Critics like Praful Bidwai believe that India's nuclear energy drive will sound the death knell of precious ecosystems - six 1,650 megawatt reactors will be built at Jaitapur on the west coast, it is planned, in what would turn out to be the world's largest 'nuclear park'. They say the government has forcibly acquired farmland using a colonial law to build the plant. Mr Bidwai, who visited Jaitapur, writes that the nuclear plant will be situated on fertile farmland, not barren wastelands as the government would have people believe. Then there is the threat the plant poses to thriving fisheries. Officials say no local will be displaced from his land, although more than 2,000 people have had to sell parts of their land. So are the protests about better compensation for land, and guarantees about safety?

Most scientists I spoke to dismiss a lot of what the campaigners say, insisting that nuclear power is really the only option India is left with to meet its growing energy needs. An astonishing 400 million Indians continue to live in the dark, without electricity. "You have to choose the lesser evil - more carbon dioxide or the threat of radiation," one told me. Smoke-belching thermal power plants use the atmosphere as a "sewer" and impact climate change. Solar and wind energy cannot meet India's energy demands, they say. Ergo, nuclear power, they say, is the only sensible and clean option. That is why India is planning to set up some 30 reactors over as many years and get a quarter of its electricity from nuclear energy by 2050.

Scientists agree the government has to tread carefully in building consensus at the grassroots and while acquiring farmland to set up the nuclear plants - there is no room for forcible acquisition of land at unremunerative prices.

Then there is this shrill debate over the safety of the plant. Critics point out that the French-built reactor meant for Jaitapur has still not been approved by nuclear regulators worldwide. They say that the site is seismically hazardous - the area was apparently hit by 95 earthquakes between 1985 and 2005 - and since it will be built on the coast will be prone to tsunamis.

Scientists dismiss these arguments as naive and ill-informed. India, they say, will not buy these third generation reactors until international and local regulators clear them. India's nuclear regulators say that Jaitapur is in a "significantly low seismic zone" compared with Japan and Fukushima. Also, the reactors will be built on a cliff 82ft (25m) above the mean sea level. With its 20 reactors, India, scientists insist, has a good safety record. (There was a turbine room fire at a plant in 1993, and a sodium leak in another in 2000). "There have been no serious incidents. There has been no radiation leak. Our record is clean," one official said.

In the tangled skein of conflicts bedevilling Jaitapur, it is easy to lose sight of the main issue: should India pursue nuclear energy to solve its crippling energy shortage? Or should it stumble along, uncertain about the alternatives and keeping 40% of its people in the dark?