The chequered history of cricket diplomacy 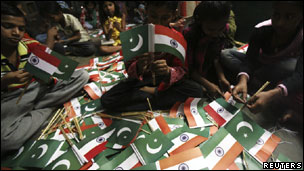 But can cricket help? Will the presence of Indian PM Manmohan Singh and his Pakistani counterpart Yousuf Raza Gilani and their respective entourages at Wednesday's semi-final between India and Pakistan help revitalise the jaded peace process? Or will cricket diplomacy merely end up causing nightmares for the harried organisers of Wednesday's game which will be held at a small stadium in Mohali in Indian Punjab?

Reports from Mohali suggest that the politics of the event is threatening to take centre stage. "The cricketers have suddenly become the bit-part actors in the drama," writes analyst Sharda Ugra. "The two states and their prime ministers have struck. The Indian invited and the Pakistani accepted which now leaves the local hosts worrying about more than whether their sofas and carpets are spruced up and smelling of roses."

Politicians, Ms Ugra says, have certainly made things difficult for organisers. "Hosting prime ministers is one thing, but where the devil can the 50-strong "entourages" that will accompany each of them, be fitted in?" she wonders. "Surely their Honourable-nesses could have watched the game on some giant LED television? " It's a good question.

Cricket diplomacy between India and Pakistan has a chequered history. Sometimes it has come as an icebreaker; at other times; it has merely marked a deceptive lull before another storm.

Former Pakistani President General Zia-ul-Haq started it all when he came to India to watch a Test match between the two sides in February 1987 as part of his "cricket for peace initiative". Delhi had launched a huge military exercise on its border during the winter, and a rattled Islamabad had bolstered troops on its borders in response. The game in Jaipur turned to be a dismal affair, plodding to a draw after rain washed out a day's play and Pakistan objected to sawdust being strewn on the pitch. Two games later, Pakistan grabbed its first Test series win in India.

During the game, the grapevine buzzed, President Zia apparently whispered to Indian PM Rajiv Gandhi that Pakistan had the nuclear bomb. Later, using pointed metaphors, he reportedly asked Indian reporters: "Why do you ignore my sixers to Indian bouncers?" The "peace initiative" came a cropper - though the tension on the border was defused, Indian-administered Kashmir exploded into full blown militancy two years later. Much of it, India alleged, was plotted, fanned and executed by groups across the border.

Some believe that cricket diplomacy may have sometimes actually helped in lowering the temperature between the two countries. They point to the two sides resuming cricket ties in January 1999 - after a decade-long hiatus - just six months after the two countries exploded nuclear devices. In India, the regional right wing Shiv Sena objected violently: its supporters dug up the cricket pitch and demonstrated outside the Pakistani embassy in Delhi, attacked the cricket board's offices in Mumbai and threatened to release snakes in the stadiums.

On field, things were more cordial. Former Pakistan foreign secretary Shaharyar Khan, who was the team manager, remembered a "certain maturity" among the crowds watching the games in this landmark home series. "Good performances were appreciated without bias," he wrote. "The teams interacted sportingly on the field."

Ten thousand Pakistani fans crossed the border to watch a one-day game at Mohali. Mr Khan remembers the "memorable" hospitality shown by Indians - shop owners and taxi drivers gave out discounts to fans from across the border, and a generous Punjab government organised a free Bollywood film show for Pakistani cricketers and a free dinner for visiting fans. He called the 1999 tour "a huge diplomatic and public relations" success.

A few months later, the war in Kargil neutralised cricket's gains. Relations between the siblings deteriorated. Only in 2004 - three years after the failed Agra summit between the two sides - the then Indian PM Atal Behari Vajpayee travelled to Pakistan for a regional summit to break the ice as India announced a cricket tour of Pakistan. "Mr Vajpayee has, in fact, opened the innings," said Mr Khan who was by then chairman of the Pakistan Cricket Board.

Pakistan was to host an Indian team after 19 years. Twenty thousand visas were issued to Indian fans for the five-week tour. It was a resounding success and Indian fans returned with incredible stories of Pakistani hospitality. India won both the Test and one-day series, both closely fought.

Off the field, Mr Musharraf savoured every moment of the game. He later wrote:

Unfortunately for my hosts, the match turned out to be an embarrassment for India because one of Pakistan's star batsmen, Shahid Afridi, clobbered virtually every ball that the Indians bowled at him. Many of his hits headed straight for our VIP enclosure. Like any normal cricket fan I wanted to jump out of my seat shouting and clapping, but I had to control my enthusiasm in deference to my hosts.

Before the match was over, we left for our discussions. It goes without saying that I was dying to get back to the exciting match. So during our official one-on-one meeting I suggested to the prime minister that we go back to see the last hour of the match and also distribute the prizes. I made him agree in spite of his concerns about security. But then, as the meeting continued, my staff kept sending in notes informing me about the collapse of the Indian team when its turn came to bat. India's entire team got out long before the end of the game. Tightly repressing any outward signs of my inner joy, I had to inform Manmohan Singh that the Indian team's batting had been wasted and there was no point in another visit to the stadium.

Boys will be boys, some might say, but they obviously don't know cricket, or the importance of a match between Pakistan and India.

Mr Singh's foray into cricket diplomacy fetched mixed results, say analysts. The two leaders talked about Kashmir, and conflicts over Siachen and Sir Creek. "Coming after a series of failed summits, the conversation between Mr Singh and Gen Musharraf was a game-changer," says analyst C Raja Mohan. "At least for a while."

Will Mr Singh be luckier the second time around? Cricket has suddenly sprung in what could turn out to be a season of bonhomie between India and Pakistan. But relations between the two have been frosty and precarious for long, and it is unfair to expect the cricketers to improve them. Let the cricketers play an exciting game. Let the politicians talk, because silence pays no dividends in this stormy relationship. If things work out in the end, cricket, as Shashi Tharoor says, will only be the "icing on the cake".