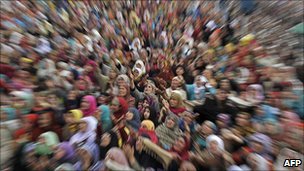 India's latest census - and the country's 15th since 1872 - brings good and bad tidings.

The country has added 181 million new people over the past decade, the equivalent of the population of Brazil, which is the fifth largest country in the world. With 1.21 billion people, India now accounts for 17% of the world's population. UN forecasters say that by 2030 India will overtake China as the world's most populous nation.

The good news is that at 17.64%, the rate of growth between 2001-2011 represents the sharpest decline over a decade since Independence. The growth rate was at its lowest between 1941-1951 when it was 13.3%: that was a time of famine, religious killings and the transfer of populations in the run-up to partition. The growth rate was more than 24% between 1961 and 1981. So a 17.64% growth rate points to a slowing down that will cheer those who are concerned about how India will bear the burden of its massive population.

The bad news for those with such concerns is that India still has more than a billion people, and this number is rising. Indian politicians and policy planners speak eloquently about how this population will fetch demographic dividends, and ensure India's growth story.

But such optimism may be unfounded if the state is unable to harness this potential. It is very easy, warn social scientists, for this demographic dividend to turn into a deficit with millions of uneducated, unskilled and unemployed young people on the streets, angry and a threat to peace and social stability. "There is nothing to brag about our population growing and crossing China. Do we know how we are going to skill all these people?" asks India's top demographer, Ashish Bose.

The government would like to say that the dip in population growth has to do with pushing a successful contraception programme in the country. But social scientists say that with rising urbanisation, it is no surprise that population growth is on the decline. Increasing urbanisation leads to nuclear families in small homes paying high rents in increasingly expensive cities. Having more children does not help matters.

The biggest shock in this census is the decline in the child gender ratio at 914 girls (under the age of six) for every 1,000 boys. This is the lowest since Independence and it looks like a precipitous drop from a high of 976 girls in the 1961 census.

Social scientists and demographers believe that the decline in the number of girls all over the country - in 27 states and union territories - points to deeply entrenched social attitudes towards women, despite economic liberalisation and increasing work opportunities.

They link sex determination tests and female foeticide - banned in India, but still quite widespread due to lax enforcement - to the rising costs of dowry, a practice which even the burgeoning middle classes have been unable to get rid of. "Marriages have become costlier, dowries have been pricier, so there is a lot of social resistance to having girl children in the family," says Mr Bose.

One demographer told me that when they went counting a family during the census in the patriarchal northern state of Haryana, he found that it didn't count the girls. When asked why, they told him that the girls would be leaving the family after marriage anyway.

The government says it will reconsider its policies to make sure that this shameful trend is arrested. I take this to mean that they want to make sure that anti-sex determination laws are enforced strongly. But increasing the numbers of girls requires a shift in attitudes and more imaginative policies. In Bihar, for example, the government is giving away free bicycles to girls to go to school. And Gujarat has launched vigorous drives to check female foeticide and educate girls.

The census has also thrown up an interesting conundrum. How do you explain that the overall gender imbalance has narrowed when the number of baby girls being born has plummeted? This census found 940 females to 1,000 men, up from 933 females in 2001. This is the highest since 1971, and just a shade lower than 1961. This contradiction confounds social scientists. Is this a statistical discrepancy which needs to be investigated further?

One more piece of good news. The literacy rate has shot up to 74% from about 65% in the last count. More hearteningly, new female literates outnumbered male literates during the past decade. Ten states and union terriorities achieved a literacy rate of above 85%. The quality of education may be uneven and debatable, but this is an achievement India can be proud of.