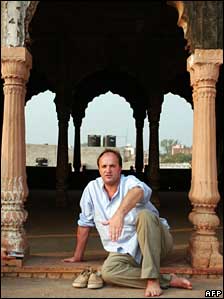 Delhi's literary salons are abuzz over a bitter row between a British writer and an editor on an Indian magazine. Some believe the spat between William Dalrymple and Open magazine's political editor Hartosh Singh Bal will cloud Asia's best-known literary festival in Jaipur which Dalrymple co-directs with Indian writer Namita Gokhale. I suspect, like most controversies, this will actually end up helping Dalrymple, Bal, Open magazine and the festival, not necessarily in that order.

In a rather dishevelled and provocative opening salvo on why Indians writing in English crave "British approval", Bal took a swipe at Dalrymple describing him as a "pompous arbiter of literary merit in India". He skewered the Jaipur festival - which opened today - for its obsession with British writers: "If Jaipur matters as a festival, it is because of the writers from Britain it attracts." The festival, he wrote, "works not because it is a literary enterprise, but because it ties us to the British literary establishment". And if Dalrymple appears central to our literary culture, signed off Bal, it says "something more damaging about us than about him".

Dalrymple hit back with an acerbic rebuttal using strong language. He described Bal's piece as "blatantly racist", saying it "felt little more than the literary equivalent of pouring shit through an immigrant's letterbox".

He tore into Bal's argument that the Jaipur festival was a British jamboree - British writers "brown, black and white" make up a "minority within the minority" of foreigners, he wrote, adding that two thirds of the writers invited were Desis (South Asians).

On the face of it, it is difficult to contest this defence - the festival's two key international speakers are Turkish (Orhan Pamuk) and South African (JM Coetzee), there are sessions on literature from India's neglected north-east, from Palestinians, Israelis and Pakistanis. Minority and Dalit (Untouchable) writing features too. Dalrymple also accused Bal of "double standards and reverse racism".

Bal picked up the gauntlet, denying the racism barb and said that Dalrymple did not know "what it means to suffer the indignity he so easily cites in his defence". He added: "I have had to stand in a London tube as drunk football falls pouring out of a match called into question the race and origins of people such as me."

The dust-up has predictably raised the hackles of commentators both in India and Britain - The Telegraph in London called Bal's piece a "nasty piece of journalism"; respondents in Open magazine worried about Dalrymple's literary influence in India and accused him of writing shallow books on Mughals.

But for the personal attacks on both sides, this appears to be a stale debate. Indian writers have benefited from British approval for nearly a century now. WB Yeats introduced Rabindranath Tagore's Gitanjali (Song of Offering) to the world in 1912. It became his best known work in the world and won him the Nobel Prize. The doyen of Indian writing in English, RK Narayan, was introduced to the world by Graham Greene who recommended his debut novel to a publisher, leading to its publication in 1935. Salman Rushdie won the Booker for Midnight's Children a good half a century later.

The debate about whether Indians writing in English look for approval from abroad - or to foreign publishers and awards - also has a sense of deja vu about it. One of India's award-winning writers Shashi Deshpande has argued that Indian writing in English smacks of post-colonialism. She has said that such writers "do not know any Indian language well enough" and that "the outsider's assessment still remains the privileged one". Writer Meenakshi Mukherjee has dwelt upon Indians writing in English being gripped by an "anxiety of Indian-ness" - "Indian-ness" being a quality their books needed to travel abroad.

One leading Indian writer I spoke to said that he never understands this grouse. "England and America are bigger markets. It's natural to care. Having a home market is good, but it is still small. The good thing is that it is growing." Many writers agree that it is odd that literary festivals in India should be run by foreigners. But why moan about it, they say. If we feel strongly about this, should we not mount alternative events instead? So is this all, as a writer friend wonders, just a storm in a teacup?