Stink over onion crisis is enough to make you cry 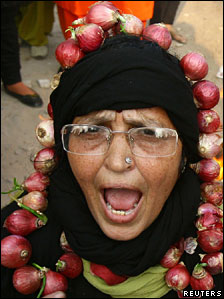 A spectre is haunting India - the spectre of an onion-less life.

Onion prices have shot through the roof this week, climbing to an eye-watering 85 rupees ($1.87; £1.20) a kilo from 35 rupees only last week. Crop damage due to unseasonal rains has apparently led to a shortage. Traders have been hoarding stockpiles of the staple food to make a killing, despite official threats to punish them.

A fretful government has banned exports till mid-January to bring prices down, and cut import duties on the vegetable. The prime minister, we are told, is busy writing letters imploring his farm and consumer affairs ministries to bring down prices quickly. The opposition is breathing fire.

Onions have stormed their way to the front pages of newspapers and the top of TV news bulletins. I counted two dozen stories on onions in a dozen-odd English papers today. One editorial chides the government for the price rise and asks it to "know your onions". "UPA [United Progressive Alliance, another name for the ruling Congress-led government] lands in onion soup", is a particularly colourful banner headline in another paper. "Onions: Weep till March", bemoans yet another headline, alluding to a minister's deadline to fix the crisis. And a tabloid's onion edit - teasingly called "More at work than onions" - is strategically placed between one on a corruption scandal besieging the government and another on the sizzling alleged affair between the British actress Liz Hurley and the Australian cricketer Shane Warne.

Chefs and cookbook writers have come out in droves giving out free tips on how to cope without onions. "My advice, especially to those who want to eat out," says one chef, "would be to shift to different cuisines for a while as onions are primarily used in Indian cooking." So try European and other Asian foods, he advises. At home, he says, substitute onions with tomatoes and curds. Onion lovers may not find that a very convincing answer.

Everyone is concerned about the prospect of life without onions in India. Most worried of all are the politicians. In 1998, onion inflation was partly blamed for the unseating of the Hindu nationalist BJP government in Delhi's state polls. Political pundits insist that steep onion prices also contributed to the now-defunct Janata Party's debacle in the 1980 general elections.

So why do high onion prices drive Indians up the wall and unseat governments? One onion exporter said to a paper: "Why does the consumer never compare prices of onions with those of other vegetables? No vegetable is available at less than 40 rupees a kg in the retail market."

It's simple. Onion is a vegetable that no Indian kitchen can do without. It is also the most egalitarian of vegetables. A poor peasant or worker's sparse meal is incomplete without a bite of the pungent bulb. The onion is pureed, sauteed and garnished in the rich man's feast as well. It also occupies a unique culinary space in Indian cooking.

It is a must for adding taste and crunch to many vegetarian and non-vegetarian dishes. It is eaten raw as a salad, pureed for flavouring and sauce for meats and garden vegetables; used as a dip; fried as fritters and crisps. Rustic medicinal beliefs have it that it has healing properties and reduces acidity. Indians believe onions cool the body in the searingly hot summers and keep fungal infections away during muggy monsoons. In the old days Hindu widows kept away from onions after their husbands' deaths as the humble bulb was believed to have aphrodisiac qualities. How can you possibly compare such an exalted vegetable with any other?